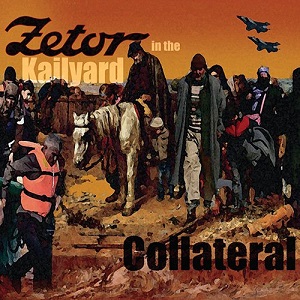 
“Collateral” is the debut album from Zetor in the Kailyard, a Scottish duo of Roddy Johnston and Kate Badcock who list an impressive array of instruments. It takes migration as it’s theme as it weaves through a series of predominately traditional songs from both sides of the Atlantic interspersed with tune sets.

But that’s not the whole story.

In these days when we are encouraged to consider immigration in numbers and quotas this is a text book response that considers the real issues, that of humanity and the personal effects on the individuals caught up in the struggle.

The opening track is a self-written tune by Johnston, it showcases the talents of the two multi instrumentalists, Eastern influences, the sense of a journey into the unknown, taking with you your possessions, a lifestyle summed up by notes. Adding new ideas into the melting music pot, we are exposed, we learn, we integrate. We are caught up. We are “Collateral”.

And being dispossessed is nothing new. “Jamie Raeburn” tells the tale of a Glaswegian Baker through the eyes of his sweetheart Catherine as he is arrested, tried and deported to Botany Bay, an innocent soul. It is a very atmospheric reading with alto sax and piano adding the perfect accompaniment to the clear and emotive vocals.

Fiddle, pipes and flute are to the fore as “By The Hush” takes its theme from those who choose to escape a poverty-stricken Ireland only to find a new life in America one that forced them into a war far worse than the conditions in their homeland. An early miss-sold dream far more relevant than P.P.I.

There’s a relentless drive to Woody Guthrie’s “Pastures Of Plenty”, a song well covered by many an artist, here it sounds fresh, direct and relevant.

A brief escape. The sheer beauty of a tune set, “Angus Sutherland” which flows into a pair of Cape Breton reels.

Doom however drips palatably as the pair tackle “The Burning of Auchindoun”, a threat, a warning unneeded, mediaeval warfare, slow precise but very, very powerful. Thinking of current situations in the world such as North Korea only the scale is larger.

Exiled. Longing for your homeland and the simple things you miss, such as a hillside flower, Zetor add their version of “Broom o’ the Cowenknowles” before addressing “Careless Love” another standard which sits easily across many genres of music: here it lies in the folk tradition with pipes that cannot fail to have you tapping your feet.

All throughout the arrangements are impeccable, when you list flute, alto saxophone, piano, harmonium (Kate Badcock) along with fiddle, border pipes, guitar, saz, banjo, mandolin, bodhran, darabuka and bombarded (Roddy Johnston) the temptation to throw everything at songs must be immense. Here it never happens, there’s a wonderful space as the music is allowed to breathe. Familiar yes, staggeringly good definitely.

“Collateral” closes in the perfect way. An all inclusive song about migration. You are all welcome here, the message given. “All through the story the immigrants came / The Gael and the Pict, the Angle and Dane / From Pakistan, England and from the Ukraine / We’re all Scotland’s story and We’re all worth the same / Your Scotland Story is worth just the same”. Yes it’s the Proclaimers, and, as much as I like the original, Zetor in the Kailyard add more feeling, you believe in the words in the meaning and sincerity of those singing. Zetor, you own this song musically, absolutely brilliant.

Right, on that note I’ve finished and off to dig out the wonderfully uplifting DVD of “Sunshine on Leith” for another watch.

The Cold and Rainy Night