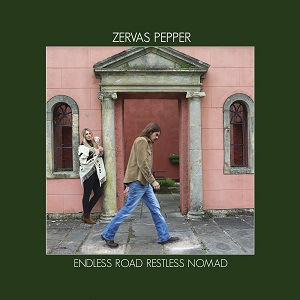 
They've lost the ampersand, but otherwise it's business as usual for Welsh duo Paul Zervas and Kathryn Pepper, which, as regular listeners will know, means music steeped in the influence of late 60s early 70 West Coast folk rock.

The title a coming together of two songs, the material was written while touring Europe, a life on the road free spirited vibe informing both the feel of the music and the thematic content with its nostalgia for the 60s summer of love when optimism wasn't in such short supply.

It opens with Kathryn upfront on the lyrically upbeat 'The Gift' with its traces of Pentangle jazzy folk and Joni's more flower child days laced with their impeccable channelling of those CS&N harmonies. Echoing the desert haze and dryness of the signature America sound, 'Restless Nomad' brings Paul to the mic, staying there as the guitars take on more resonating tones with 'Gas Bottle Blue', a song about missed opportunities and chasing dreams that conjures thoughts of Andrew Gold and Jackson Browne.

Kathryn returns for the second of the title tracks, 'Endless Road', an Allmans-like light guitar riff guiding her down the white lines out of the dark and into the light, then it's back to Paul for the folksy fingerpicked 'Salvador' (inspired by wondering what Dali would have made of Paris) with its soaring wordless harmonies, the alternating lead continuing with Kathryn on the free as the breeze melody of 'Cards' contrasting with its lyrics about the imbalance of wealth and power in a world where, as they note, homelessness has risen by 165% and the sales of super-yachts by 800%, Paul subsequently counterpointing with 'Cruising Clear' and a quest to find altered states and survival.

Heading towards the end, Pepper on lead, 'Catacombs', a dark-veined song imagining a sort of female Blubeard who's buried her lovers beneath the Paris streets), has a bluesy guitar feel while there's some psychedelic backwards effects on 'There Is Only Love' before it ends back in Kathryn's arms with the dreamy, calming 'Indian Seas' where time's suspended, much as the duo hold their music in a Laurel Canyon/Californian bubble, warm, honeyed and inviting you to bathe in its light.