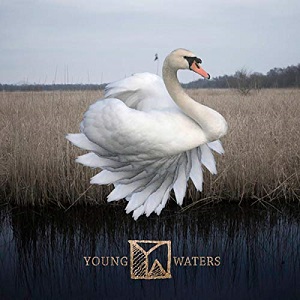 
Bristol-based neo-folk band Young Waters have delivered an eponymous debut album full of quietly powerful songs and mesmerising soundscapes, consisting of six band originals, a Jesca Hoop cover and a traditional ballad. While Young Waters' sound has a clean, contemporary edge, there are pleasing echoes of classic 1970s folk music, for example Pentangle and Roy Harper, and there are also mystical and whimsical passages which recall the heyday of The Incredible String Band.

Theo Passingham and Kerry Ann Smith (or Kerry Ann Jangle) are both fine individual singers but their intricate harmonies, which blend and overlap in intoxicating fashion, are perhaps the defining aspect of the band's sound. Also very prominent in the mix are Calum Smith's violin and Rowen Elliott's viola, which function as a conventional strings section and also weave in and out of the music in a beguiling way. There is also a strong rhythmic pulse to the music, provided by punchy acoustic guitar strumming from Theo Passingham (who is also a fine guitar-picker) and, particularly, the wonderful double bass (and bowed bass) of Liam O'Connell.

The sublime vocal harmonies are immediately in evidence in the opening song, "Dust", which is also notable for stately strings, pulsing double bass runs and a series of sparkling violin and viola breaks ("…we begin to rust, return to dust, just another day in the paradise circus…"). Opening with lyrical Spanish guitar, "Don't Stare At The Sun" features some haunting vocal harmonies and has an Elizabethan vibe ("…why did you fly so close to the sun, feathers burnt to cinders, can it all be undone?"). "Weary Soul" is an outstanding slow-burn of a song, with interesting changes of rhythm and tempo and some swinging Appalachian style violin and viola breaks ("…I was born a weary soul, already tired of this world, how did I end up here?").

"Polly Vaughn" is a tragic and cautionary traditional ballad, its moving content accentuated in spine-tingling fashion by the ethereal, a capella vocals and harmonies ("…sheltering from the rain in a bush, with her apron thrown around her, he mistook her for a swan and shot her and killed her at the setting of the sun…"). There is a real dynamism and energy about the closing song, "Swimming Pool", with sparkling guitar, stirring violin and viola breaks and more of those sumptuous, overlapping vocal harmonies.

Young Waters have produced a very fine debut album, which both showcases their current prowess and signals their potential to develop into a real force in contemporary neo-folk in this country.