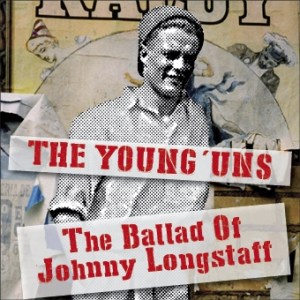 
Each album the Young ’Uns release, each venture which they instigate or with which they get involved, invariably brings artistic rewards in excess even of expectations, and this latest project is no exception. It chronicles the life and achievements of an unsung hero, Stockton-on-Tees-born Johnny Longstaff (born 1919, died in Portbury, Somerset 2000). The very fact of Johnny’s existence was (via an old photo) thrust into Sean Cooney’s hands at a gig in Somerset in 2015 by Johnny’s son Duncan, who then alerted Sean to the presence of several hours-worth of recordings, in the Imperial War Museum’s sound archive, of Johnny telling his own tale. Sean was sufficiently enthralled to follow this up, and these oral testimonies proved such compulsive listening that more detailed research was eagerly undertaken. The result was a veritable social-history thesis, which in basic terms involved the creation of a brand new stage show, a theatrical experience mixing songs, spoken narration, rare images and the actual voice of Johnny himself.

This album release is intended as a companion to the stage show; I guess you could say it’s somewhat in the nature of a concept-album-plus (in all but name),and in addition to the 53-minute audio CD the pre-order package under review contains a commendable collection of additional artefacts that well transcend the tag of ephemera. These comprise (wait for it!) a 40-page A4 book of song lyrics with full background notes, detailed explanation of the historical events and other stories behind the songs; a facsimile newspaper containing both further information and insight and humorous commentary; and sundry other little items (poster, repro photo, song-sheet). So you too can immerse yourselves in the world of Johnny Longstaff, an extraordinary ordinary working-class man who through his concern for social justice bore witness to some of the biggest political and social events of the first half of the 20th century – wars, hunger marches, anti-Fascist protests and riots – and in so doing come to understand his motivation, what drove him to become involved in such crucial matters as the Spanish Civil War. Johnny Longstaff’s own personal history also reflects, and contextualises, the wider story within which issues such as people-power and perennial class struggle figure prominently – as indeed they do today, and much of the songs’ achievement is to carry these resonances through, for and with us listeners living in today’s world.

Just as with all the Young ’Uns’ work, the Ballad is presented with a keen eye for detail and accuracy, and the songs on the CD – the majority written by Sean – explore aspects of the themes and events and associated characters and personalities with true compassion and understanding, while laced with not a little wicked humour. It’s a bit of an emotional rollercoaster at times (something else we’ve come to expect from the Young ’Uns) – with reminiscences of poverty and comradeship, notable battles and private wars, all tellingly counterpointed with ribald ditties, trench tales or music-hall-style jokes, bawdy or salacious snippets from David (Paella, Noddy) and thought-provoking reflections on key anthems of the time such as The Internationale, Ay Carmela and The Valley Of Jarama. In amongst all this we encounter the stories of other specific personalities important to their age (Lewis Clive, David Guest and BCP member Bob Cooney – the latter survived because he was prevented from being sent to fight in Spain).

A good proportion of the CD’s songs are sung a cappella, in typically forthright, brilliantly harmonised Young ’Uns fashion (often recalling CB&S, but the Young ’Uns don’t suffer one iota in the comparison). Items such as Any Bread? (a depiction of Johnny’s Teesside upbringing and the attendant omnipresent poverty) and the scattergun Hostel Strike (transferring the experience of starvation to London and the stand taken against indifferent food) are early highlights of power and accomplishment, the Young ’Uns at their definitive best. A handful of songs, like No Hay Pan and the tenderly poignant Ta-ra To Tooting, employ a judicious, simple and undistracting piano accompaniment. Other standouts include Over The Ebro, chronicling the battle on Hill 666 where Johnny was severely wounded, and the rousing hunger-march-themed Carrying The Coffin. Two of the songs on the CD – Cable Street and Bob Cooney’s Miracle – had already been premièred on the Young ’Uns’ 2017 album Strangers, but they sound even better here placed within this suite of songs, the impact of which (and indeed of all the songs) is further enhanced by the interpolation of passages of Johnny’s own voice used as a linking device within and around the individual songs.

In short, The Ballad Of Johnny Longstaff is seriously masterly, to the extent that no review approaching completeness or of even comparable detail can do it full justice. Whatever The Young ’Uns do, they do exceedingly well – and properly – and never skimp or shortchange on the quality and presentation of the end product. In terms of presentation specifically, The Ballad Of Johnny Longstaff may be a comparatively unorthodox entry in the Young Uns canon, but it’s an important project nevertheless and an essential acquisition. And finally, should you still not be satisfied after experiencing The Ballad Of Johnny Longstaff, for our exclusive money-back guarantee “turn to page five” (proclaimeth the banner of the enclosed four-page newspaper!)… Any takers? Thought not!!

The Ballad Of Johnny Longstaff