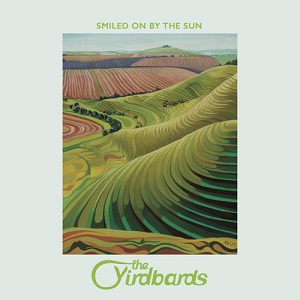 
Hailing from Wiltshire the Yirdbards (Yird – noun, earth, Bard – noun, poet) have been playing their take on pastoral folk song since 2010, ‘Smiled on by the Sun’ is their 3rd album. They have gained a good following and reputation locally for their interpretation of traditional styled songs about the countryside and the landscape.

The first track (Barley Doll), they first heard sung by the writer Clive Brackenwood, a tale about love lost and the power of the corn spirit. This starts the album off with a real English country feel. This feel continues through the album which includes Paul Darby’s song Ravens Return about the return and success of the Raven in the Wiltshire countryside. Although the next song changes continent to a tell the story of the Mongolian nomads (Breaking Horses) which contains the wonderful rhyme ‘Seduced by global economic forces unlikely to return to breaking horses’. The song does have a serious message about how change is affecting us all – whether in the western world or the remotest corners of Mongolia

The album also contains an excellent version of Chris Leslie's song ‘The New Fiddle’, the story of deceit in the violin making world. The next track (The Collector) is also set back in Wiltshire, and concerns the work of Cecil Sharpe as he travelled through rural England collecting folk songs.

Then the album moves on from the rural idyll to the powerful and chilling subject of war with Karine Polwart and James Kelaghan’s song about the nameless, forgotten rank and file. This has an almost Home Service style and feel about it and is in my opinion one of the best tracks on the album.

The last song is another favourite, Christmas in the Trenches by John McCutcheon. This song, of course, tells the story of Christmas in the Trenches in 1914 and the football match between the British and German soldiers. A song which could only be British, giving us an understanding of what it must have been like on that cold Christmas in the trenches and that one day when there was no fighting. How much more difficult it must have been to face an enemy that you had greeted, swapped songs and stories and played football with the previous day when hostilities resumed the following day.

The Yirdbards third album, Smiled On By The Sun, with a mix of local, traditional and self- penned songs - as English as it comes