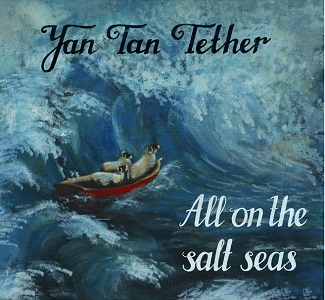 
Yan Tan Tether is a trio of fine female singers based in West Yorkshire, whose harmonious and imaginative arrangements of folk songs have been winning them a devoted following across the folk circuit over the past three or four years. They’ve released three CDs to date, each one cannily arranged around a theme of some kind. Over The Heather was their debut offering, and Down In The Forest was a seasonal (wintry) collection; now comes All On The Salt Seas, whose title speaks for itself – after all, a programme of maritime-flavoured songs is a fitting compendium for a landlocked group worth its salt (ha!).

Lynne O’Malley, Rosie Knighton and Tess Leslie possess distinctively complementary voices that both work and blend well together, and their harmonies are attractive and faultlessly executed – and clearly well-practised; intonation and enunciation are commendable (even if it means the difficult plosive is audibly avoided on occasion). Each of the three ladies takes appropriate turns at singing the lead or melody line, and any judicious switching-around of parts, or lead voice, during the course of a single song (as on Adieu Sweet Lovely Nancy) is imaginatively managed. And Yan Tan Tether are unafraid to insert passages of wordless diddling where instrumental interludes might otherwise be placed.

On Yan Tan Tether’s debut album, I’d felt the need for a little more overall contrast in timbre at times, and the past few years of singing together have enabled the ladies to stretch the envelope and experiment more in this regard and take some interesting chances with this aspect of their arrangements. In which context, another feature which is immediately apparent is that the Yan Tan Tether versions of their chosen songs are consciously and thoughtfully arranged (sometimes with a capital A). By which I don’t mean A Bad Thing, but two unavoidable consequences of this can be first a conscious feeling of striving for effect, and second that after one or two hearings you’ll know exactly what’s coming, and thus some of the more theatrical gestures or episodes can lose their initial impact or wear thin (I’m thinking of instances like the rallentando device used on individual verses of Greenland and Maid On The Shore, for example). At the same time though, the ladies don’t let their enthusiasm get the better of them!

I sometimes feel that the very concept of arrangement can run the risk of taking the place of spontaneous response or expression; tightness of control may be achieved at its expense, and this might inadvertently conceal (or even remove) the joy of singing together. Also, there’s a balance to strike between storytelling and interpretation, and it can be difficult to fine-tune this balance at times; the “right answer” is not always the most obvious one, and may even vary according to the occasion of the performance, for even many years’ experience of singing cannot guarantee a “right first time” response that will satisfy performers and audience alike…

As on the trio’s previous albums, the actual song selection is enterprising, although (and this is not meant as a criticism) not as overtly eclectic or world-embracing this time round (well, the maritime song genre does rely more heavily on the “mainstream” folk tradition I guess). Wisely, Yan Tan Tether have avoided tackling hard-core shanties, which by and large would not have suited their voices – although they turn in a captivating drone-backed take on Bold Riley (admittedly owing more to Kate Rusby’s version than Bert Lloyd’s) which for me is a disc highlight. Ten of the disc’s eleven songs are traditional in origin, the exception being Wendy Arrowsmith’s splendid (and very much traditional-sounding) lullaby Sleep Well Till Morning. Pedants may note that the song listed as 10,000 Miles is not the lament commonly known by that title, but the song more often called Blow The Winds I-O; here its treatment may steer too close to jolly glee-club for some tastes, One of the disc’s songs (Constant Lovers) is (perhaps inevitably!) reprised from the trio’s Over The Heather CD – after all, it’s been part of their live set for ages – but I can’t discern any significant difference between the two recorded appearances of this song; whatever, Yan Tan Tether’s treatment is nicely measured and respectful to the source (speaking of which however, it’s a disappointment not to find any background or source notes in the package, only a list of titles on the back cover).

There is much to delight and admire in Yan Tan Tether’s zestful singing and in their refreshingly individual takes on their chosen material, and the CD has been sympathetically produced by Phil Snell. The disc is housed in a very attractive digipack sporting appealing artwork (a cover painting by Tess herself) and photography. So all you need to do is sit back and soak up the sonorous sea air conjured by these siren songs!