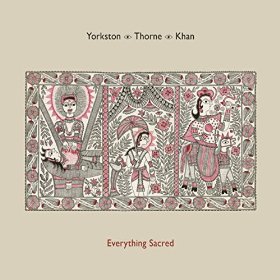 
Yorkston/Thorne/Khan is a new grouping, an experimental trio that brings together influential Scottish singer/songwriter James Yorkston, jazz double bass player Jon Thorne (from electro outfit Lamb) and New Delhi's sarangi maestro and classical singer Suhail Yusuf Khan. Thorne has been playing bass with Yorkston since 2009, while Khan's initial encounter with Yorkston was backstage in 2011, quite by chance, which resulted in ad-hoc joining him onstage, which was so successful they've kept in touch ever since, finally getting together in the studio.

The 51-minute programme comprising Everything Sacred starts out with arguably its most challenging piece, the extraordinary, and extraordinarily exciting thirteen-minute Knochentanz, whose extended form and improvisatory structure seems almost to approximate that of a raga and involves some impressive guitar string-bending in counterpoint with Khan's keening sarangi (once heard, the wondrous, mournful, almost vocal wailing swoon of that instrument is never forgotten!), but also contains a curious hiatus just over halfway through at which Khan's own edgily declamatory vocal is introduced. The CD includes two further instrumental excursions. The all-too-brief Vachaspati/Kaavya, where Thorne's deft, resounding serpentine bass strides below Khan's soaring sarangi, almost serves as an interlude in the midst of the disc's central programme of songs. And finally there's Yorkston's own guitar-led instrumental Blues Jumped The Goose, which after a start quite reminiscent of classic Pentangling, encourages some late-night jazzy progressions to be coaxed from the sarangi strings before a more animated climax brings the disc to a close.

Onto the vocal items, and the highlights just have to be the pair of covers. Ivor Cutler's Little Black Buzzer (from his mid-70s Velvet Donkey album) is a quirky, playful little delight, with its fun coded-inflections and a delectable guest vocal from Lisa O'Neill. It comes over much like a cross between early ISB and idiosyncratic (White Album-era) Beatles; some nice tradeoff between sarangi and nyckelharpa here too. Even better, methinks, is Lal Waterson's Song For Thirza, here blessed with the limpid, beautifully sensitive arrangement for which it somehow always felt destined, with Yorkston's guitar work a miracle of rippling precision as it entwines with Khan's sarangi, and Yorkston's vocal interpretation of the intense lyric a model of empathy. Elsewhere, the finest moment comes with Broken Wave, Yorkston's own deeply felt, yet almost conversational response to the death of his erstwhile bassist Doogie Paul which finds a perfect resting-place in the context of this album. The title track's a troubled, almost bluesy rumination by Thorne, who takes the initial vocal and guitar part while Yorkston demonstrates an acute empathy with the vogue-ish nyckelharpa, whose drones complement Khan's gently caressing sarangi lines and soothing vocal. The nagging, repetitive setting of Sufi Song, however authentically imagined, ultimately feels a mite directionless in comparison with the close, tighter focus of the rest of the vocal items.

This collaboration has turned out a resounding success, where it could so easily have been otherwise, both stilted and overtly posturing, in the manner of many such deliberately eclectic conjoinings. This success is undoubtedly due to the searing but gently natural bond between the three musicians, and their willingness to embrace each other's artistic vision.