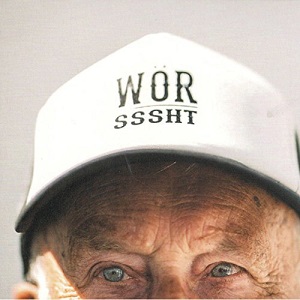 
Wor were one of the stars of the 2016 English Folk Expo. Along with the Trio Dhoore and Surpluz they brought as well as an alliteration alert, a feast of fine, friendly Flanders folk to the heart of Lancashire. They also grabbed themselves some handy bookings and network opportunities too I'd guess, which was part of the exercise.

So - 'Sssht' follows on from where 'Back To The 1870's' left off. A little like the claim on the old /early Queen albums ('no synthesisers!') the Wor tagline is "all tunes written down during the 18th Century" and gathered from places such as Ghent, Antwerp and Leuven. Listening to Wor is a lesson in history and culture in music.

To paraphrase producer Esko Jarvela, Wor epitomise the ambitious and enthusiastic in their clear vision of traditional Belgian music. The combination and variety of instruments adds to the attraction and appeal; even some good old Scottish bagpipes (showcased on 'DPLXII') join the baritone and soprano sax alongside the usual guitar, fiddle and accordion.

At times, it feels like a big band version of the pair from the city of culture, The Hut People - just imagine their percussive contribution to the expanded Wor sound. There's a thought, The Wor People, perhaps best imagined on 'Polonoisse'. And there may even be musical similarities to some ears with the Leveret philosophy in the way some of the tunes weave and wind their way up, down and round and then there and back again.

Whilst you have a piece like 'Begijnen' that comes over as a stately madrigal, there don't seem to be too far from our own tradition that we know and love, although the experts will point out the differences. Maybe the trad apple doesn't seem to fall too far from the tree or is carried easily by some means across the cultures.

Wor are maybe at their best when they switch into the mode that suits not those who like to sit an listen in intent silence, but for those who enjoy tapping their feet and the tempos get a little fresh and lively. 'Peeken' is almost frantic, prompting another tongue twisting bout of desperate and feverish alliteration.

Fortune is in their favour too as anything less than a pleasurable album might result in an unfortunate although handy use of the title. Perhaps it's best to tag their web address. At one time there was We Are Motorhead - We play rock and roll. Now there's We Are Wor - We play folk music.