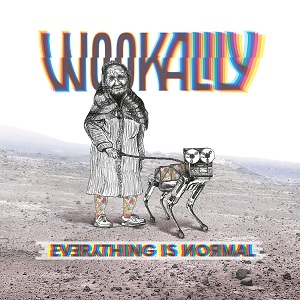 
Wookalily are a unique Irish indie folk band. Five musicians deliver music that manages to be beautiful and edgy, sometimes at the same times. The band swirls in elements of Country, Folk, Valve Amp Rock n Roll and straight ahead Twilight Zone weirdness.

"Folly Forvr" is pure Roches, or Wainwright Sisters. Beautifully thick rich harmonies with just a little gothic edge or burr. "Touche" continues the twisted Americana with its heavenly harmonies, Lyndsay Crother's slightly melancholic lead vocal and Clair McGreevy's guitar lines, balancing perfectly between beauty and disquiet. The disimbodied voice at the end and the vocalise AM radio whine adds to the sense of lateness wireless strangeness. "Welcome To The Fold" sets the strong band vocals against atmospheric bowed Bass and a chiming piano to create a shimmering lullaby. If David Lynch revisits Twin Peaks then "Escort Me" has that ice cold strangeness essential to its soundtrack, dark ear worm chorus and lyrics with grimy vintage backing, think Imelda May or Tami Neilson. "Old New Mill" for the first few lines is County Rumer, until the fever dream backing vocals and the strange double tracked vocals start, then it's a swirling Psych Country take of Witchita Lineman, disturbing enough for the Addams Family. Expect the unexpected, beauty and disquiet again. "Vampyre" is dark Rockabily noir, Clair McGreevy channels a twanged up version of early Siouxsie And The Banshees while the rest of the band smoulders and seethes around her, fits the lyric and title perfectly. "The Old Hag" is by Adele Ingram, who plays guitar and sings on the track with Louise Potter. The lyric sounds like a Folk ballad or County classic, dark lyrics tempered by sweet harmonies. "Love Makes Me Sick" as the title suggests is a real world anti love song, disquieting lyrics, dark imagery, a woozy piano and squiffy mariachi brass and to the feeling of wrongfootedness. "The Nothing Song" has a stirring start, resonant Johnny Cash guitar lines and again that delirious brass builds a feverish swirling atmosphere with find vocals. "Whisky And Wine" is a bottle half empty, slumped on the bar song, starting melancholic with Lyndsay's intimate Aimee Mann like vocal drawing you in and holding your attention while the song to builds to a trance like close. "Ghost" features a romantic spectral visitation to rival "She Moved Through The Fair". The bowed bass intro, vocals and the slow march drum build tension and atmosphere behind Lyndsay's stunning eldritch whispers, truly disturbing and again Lynchian. "Forever Folly" is a more grounded with a powerful vocal and lyric over organ, funeral brass and occasional swirls of spectral backing vocals in woozy fairground Waltz time.

Superb miasma of sensations. A musical embodiment of that superb Procol Harum, Gary Brooker lyric, that talks about skipping the light fandango, turning cartwheels across the floor and feeling kind of seasick. That wonderful mix of falling and flying at the same time like a Bridget Riley Op Art painting