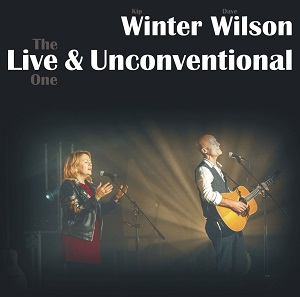 
Punningly titled to reflect that it was recorded during their support to Fairport's 1018 Winter Tour, and featuring contributions from various members of the band, this shows Kip Winter and Dave Wilson in their element, performing a selection of self-penned material from their studio albums alongside a fine version of Sandy Denny's 'I'll Take A Long Time' (featuring Messrs Pegg, Conway, Nichol, Sanders and Leslie).

The duo are consummate performers whom whatever the banter may say, never miss a beat and, having seen them live elsewhere and knowing that the song introductions and jokes are as practised and rehearsed as the music, they still feel spontaneous.

The set opens with the title track of their most recent album 'Far Off On The Horizon, a beautifully harmonised world weary number about facing a future alone after the end of a relationship and not being able to give whatever was needed to keep it alive. Save for Milestones and their collaborative sea-themed Footprints , there's something from all their albums here, their 1996 Second Skin debut represented by 'Storm Around Tumbledown', a simply strummed song about a young soldier killed during the Falklands War, the Matter of Time follow-up yielding 'This Day Is Mine' one of two numbers recorded 'as live' in the soundcheck), about taking the day off work to just have some time for yourself appreciate life, and Kip's bluesy swing take on Bonnie Raitt's 'Find Myself A Lover'.

Again there's one song off 2004's I Hear Voices Sing,' Orange Trees and Dusty Roads', a song about contemporary homelessness inspired by Steinbeck's The Grapes of Wrath, a similar theme of despair and economic depression at the heart of 'I Wish I Could Turn Back Time', sung in the voice of an ex-miner struggling to find work following the pit closures,sung by Dave with Kip on accordion and originally featured on their fourth album, These Are The Things. From here too comes 'Metagama (Look At Me Now)', the title named for the ship on which Wilson's great great uncle, one of the many young men who emigrated from Stornaway to become prospective farmers in Canada, and sung as a letter home from a young girl sailing on the same ship to join her sweetheart.

Cutting Free, the 2013 album that launched them as full-time musicians, also offers up two songs, joined again by the Fairports for a fuller band sound and, duetting on the chorus, the melodically swaying 'Still Life In The Old Dog Yet' returns to the theme of trying to find work when you reach a certain age while, sung a capella , 'Common Form' is their striking commemoration of those who "heroes led by donkeys" died in WWI ("because our fathers lied").

Released in 2016, sadly the moving 'Is It True His Eyes Are Like Mine' doesn't figure, but from Ashes & Dust you do get another of their anti-war numbers as Dave turns to banjo and Kip sings the Appalachian flavoured 'Merciful Father' with its lyric about killing in the name of God. That, accordion back in action, and the title-based swayer 'I'd Rather Be Ashes Than Dust', a line stolen from the novelist Jack London and a sentiment that echoes Neil Young's "It's better to burn out than to fade away."

Which brings us back to the last album and a further three songs, all of which has Kip on vocals, 'Tried and Tested', another relationship-based number about a woman telling her man to remember which side his bread's buttered on which Kip again channels her love of Bonnie Raitt, and, accompanied on banjo and accordion drone, 'Grateful For The Rain (Billy Boy)', which revisits 'Metagama' and is based on an actual letter written by May Grayston who emigrated to Calgary from Liverpool in 1922 on the same ship and on which she channels her young brother seeing her off and advising her new husband to treat her well.

And finally one of the finest songs Wilson has written to date, 'Ghost',a fingerpicked first person account of a girl who leaves home and her abusive father at 18 but who, her situation declared to be self-inflicted, becomes one of the benefits system's invisible in the haunting chorus line "with the click of a mouse I disappeared/ From a girl to a ghost at eighteen years", although, rather than leave you feeling thoroughly depressed, she does find a new family among her fellow homeless.

A terrific reminder of what a great live act they are and what a brilliant, social commentator and songwriter Wilson, and, if you've not come across them before, a huge incentive to track down those studio albums too.

I Wish I Could Turn Back Time