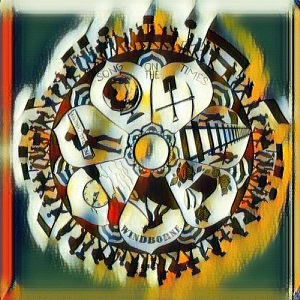 
It’s three years since I first came across this vibrant New England four-piece harmony group when I reviewed their fourth CD Lay Around That Shack. Since then, Lynn Rowan, Will Rowan, Lauren Breunig and Jeremy Carter-Gordon have been busy with this new project, Song On The Times, which comes to us in the form of a hand-stitched and bound songbook into whose back pocket is slipped an accompanying eleven-track CD containing typically lusty and well-harmonised (and harmonious) performances of the songs within. The overall theme is “songs of social struggle”, and the title song will definitely be familiar to those who followed Chumbawamba on their project English Rebel Songs 1381-1914 (which first appeared in 1988 and was revived, reworked and expanded in 2003). As will The Chartist Anthem (of which more below)… and The Diggers’ Song, which has been recorded by Leon Rosselson, Billy Bragg and countless folk outfits and agit-proppers in various incarnations over the years, and receives a driving, full-throated rendition courtesy of the Windborne singers. But there all potential direct comparison ends, for the remainder of the selections on Windborne’s disc are sourced completely from elsewhere in the annals of working-class movements for people’s rights in both the US and UK over the past 400 years.

Ernest Jones’ prescient and seriously timeless “living, breathing resistance to injustice” Song Of The Lower Classes appeared most recently on Cath & Phil Tyler’s latest CD (The Ox And The Ax) a few months back, but in a rather different musical setting; Windborne’s version extends the version recorded in the 1980s by Martin Carthy with a new verse – a gambit they adopt for no fewer than six out of the disc’s eleven songs. The anthem Bread And Roses will be familiar to aficionados of political song, and has been widely recorded in the past – in a variety of settings too, the most well known perhaps being that by Utah Phillips, but Windborne use the less often heard Martha Coleman setting. Everybody knows Pete Seeger’s Where Have All The Flowers Gone? of course, and to some extent also Florence Reece’s 1931 anthem Which Side Are You On? – and these may not have quite the impact of the other tracks, for no other reason than that they’ve been done so often perhaps.

But Windborne’s measured and thoughtful approach to harmony is a valuable adjunct to their forthright and assured delivery, and really pays off on songs such as Stole And Sold (Windborne’s intense update of an abolitionist song originally from the singing of Kentucky ballad singer Addie Graham) and Poor Soldier (a spare and haunting Civil War-era song from the repertoire of North Carolina singer and banjo player Frank Proffitt, to which Windborne have added sensitive harmonies and a new verse that amplifies the sympathy of the main argument). Indeed, one special feature of this CD is that it introduces us to some very powerful songs that we’re unlikely to have heard before even if we’re otherwise “into” songs of struggle. Fire In The Hole, for instance – written by Jon Sayles and Mason Daring for the movie Matewan concerning a West Virginia miners’ strike in 1920.. Another bonus is the excellent self-penned contributions, not just in the form of those above-mentioned extra verses updating existing texts, but a whole song too: Lynn and Will’s impassioned Slave To Time, a call to action beyond climate change done in the timeless style of sacred harp, which proves to be one of the highlights of the disc.

For the most part, Windborne perform these “songs on the times” without accompaniment or augmentation, but there’s a bare banjo plucking along behind the Seeger number, and for disc finale The Chartist Anthem there’s a sudden explosion after the third verse into massed-choir mode (with 21 extra singers, plus fiddle, bassoon and flugelhorn!) – and this is mighty indeed!

The songbook is a very individual creation – the text of each song hand-written and punctuated with artwork. It’s a fun and aptly idiosyncratic approach, even populist in an everyman kind of sense perhaps, though it can make it difficult to follow while being sung in some cases, but it can’t be denied that it suits the songs. (More on which can be found in due course on the ancillary website www.songonthetimes.com if you’re interested.) The book also contains a series of short but informative essays (one per song) by widely respected author-activists including Reggie Harris, Val Mindel, Tony Barrand, Saro Lynch-Thomason and our own Eliza Carthy. Well worth an investment, then.

So stand up, fight back and sing out! You’re in good company with Windborne!