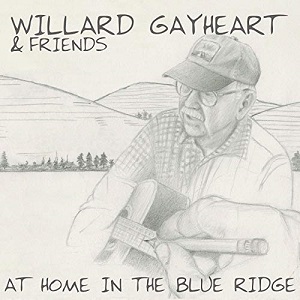 
"At Home in the Blue Ridge" is an easy listening collection of short, simple Bluegrass and Country songs, played on acoustic instruments in support of Willard Gayheart's restrained, gentle vocal. It's a little like listening to Townes van Zandt without the angst. With an acoustic guitar base, there are varying layers of mandolin, banjo, lap steel, and a liberal sprinkling of violin. The songs are beautifully played by a group of accomplished musicians, clearly at home in the genre. Simplicity done well.

Home is very much a theme of this reflective work. It's a nostalgic album where memories of a happy childhood are writ large, but more than that, it is beautifully described. These songs are stories, some with that nostalgic element, some songs of love, and one or two that carry a mildly comedic element. There is a real poetry to this work, and many of Gayheart's descriptions take you exactly to the place where he wants you to go.

"The Workin' " is essentially a look back to a simpler way of life, with precision mandolin playing being its highlight, and the theme of nostalgia continues with "Appalachian Hills". Whenever I hear lap steel played like this, it always reminds me of New Riders of the Purple Sage, itself giving an indication of the quality of the playing. The song is full of imagery: 'I can't wait to reach that mountain pass to shake of these blues and I'll take off my shoes to cool my feet upon your grass'. It takes you there.

"Sweet Virginia Beauty" is (probably) an autobiographic love song, and you can imagine it being sung on a summer's day either in the shade of a barn or under a tree: 'as we stood out near the pines I vowed to make her mine'. Its catchy chorus plays off against more great mandolin moments. Anyone who has tried to play a mandolin will appreciate how hard it is to play at this level. What's nice about this album is that it is largely uplifting and in that spirit, this love story has a happy ending: 'after all is said and done she's still the only one'.

"Coney Island Washboard" brings more memories of home (or at least someone's home) and begins with some Papa John Creech style violin. I've never heard a song before that describes how to play a washboard, but as with all these songs the poetry delivers the message. "Robin D" is about unrequited love. We all know how that feels, and how important it is to find solace in something or someone else. Here the solace is provided by a self-constructed boat, something to distract and escape that awful 'rock in the stomach' feeling.

"My Henderson Guitar" is an ode to a guitar. 'Playing mountain music on my Henderson guitar' brings in a wider meaning because it implies that the only way to really play mountain music is on that guitar. It connects again with home. "Kentucky Memories" is a joyful look back at childhood 'it never occurred to me that I was lucky as can be in the mountains of my of Kentucky home'. Most of us have places like that where we like to take ourselves back to. In addition to his Gayheart is an accomplished pencil artist whose drawings, in the words of his website, 'depict a way of life that is rapidly disappearing around Woodlawn'. This is exactly what this album achieves.

"The Shootin' " is the longest song on the album at a little over 4 minutes. Forget the actual shooting for a second. This is my highlight song from the album because it describes a single incident that breaks the summer peace of a quiet community, the description of which is sublime. Then 'Tommy Miller coming running hard' to report the shooting that had had broken the peace, and while you get the impression that things quickly returned to normal, there is always the thought that once a peace is shattered it can never be quite achieved again.

"A Turn Toward The Light" is the album's gospel song: 'the knowledge gained from every page with a turn toward the light', and contrasts wonderfully with "Ern & Zorrin's Sneakin' Bitin' Dog". Unsurprisingly about a dangerous, untethered dog, this again deals with the theme of a disturbance of the peace. It's a light hearted look at a threat to a community.

The album closes with "The Salet Song", another look back to happy childhood days. I had not previously heard the word Salet used in this context (I thought it was some kind of military helmet!), and it appears here to refer to salad leaves, but I am happy to be corrected. The lyrics provide an insight into a memory of domestic bliss, and resonates with my own experience of picking allotment vegetables with my Dad back in the day. The album finishes with some beautiful harmonies and a Country flourish.

"At Home in the Blue Ridge" is a lesson in how to write and play simple songs. It can be hard to tell a story in a song. You either overplay it, or fail to include enough detail to clarify the message. Willard Gayheart seems to have mastered the art.

Bury Me Under the Weeping Willow Tree