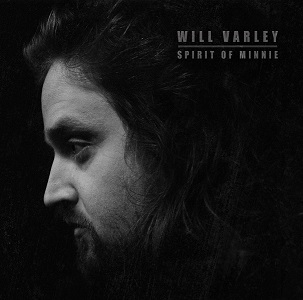 
The FATEA review of Will’s last album, the excellent ‘Kingsdown Sundown’ marked him as “the epitome of a travelling troubadour.” It was an album that he called “the most honest songs I've ever written and they represent new ground for me creatively.” All the better too for taking a darker and more sombre direction.

So how does the travelling troubadour follow up? Well, he picks up a band and keeps on keeping on. It’s not quite a Judas moment but seems a typically honest and natural progression, the usual format subtly and decoratively supplemented on a set produced by Cameron McVey whose CV includes Portishead, Massive Attack and Neneh Cherry. Whether or not he’s reined in the usual Varley free spirited, liquid loose live performances that he turns in on the road is answered pretty quickly and clearly.

As ‘All Those Stars’ becomes embedded, the initial impression is of gentle shuffles and a vaguely windswept musical vista. Plus a typical Varley tale of journeying in the search “for another kind of love/war/God/dream.” As seven days and a thousand nights away, musically, ‘Screenplay’ heads a little more middle of the road, you could (possibly) hear Elton John having a stab at this one, despite confirming the melancholy lyrical direction that contemplates the “life and dreams passing us by” thoughts and changes.

The core Varley values appear strongly on the centrepiece that is ‘Breaking The Bread’. A number which is going to rank as a Varley landmark, his gentle acoustic moments enhanced with light touch strings. Listen carefully though – “your love is like a telescope, focussed on my mind” does on the first few hearings sound like he’s talking about a well known supermarket chain. Never mind Elton John, here’s one that you’d love a healthy voiced Dylan to have a crack at.

In the same vein is the title track; stuttering jabs that fall and rise before a loose ‘Let It Slide’ drunkenly rolls out with the inevitability of embracing the madness in our brains and leads to the more ambitious arrivals towards the end of the album. Not quite vast, but certainly more cinematic sound takes over for ‘The Postman’ – what his Bobness might have called the thin wild mercury sound threatening “just before the lightning strikes.”

Saving something weirder for the end – ‘Insect’ provides the bare bones of some Varley musings and intensifies them with a feel that enhances the suggestion that ‘Spirit Of Minnie’ could be his strawberry blonde on blonde album. Having vented a quiet anger on ‘Kingdown Sundown’, the calm resignation, the introduction of a band with some more elaborate yet refined arrangements hasn’t watered down the Varley effect.