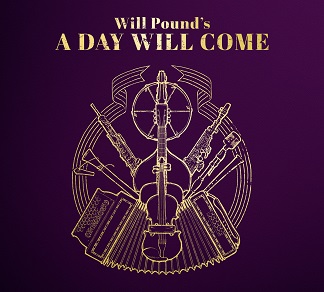 
Although the title begs the addition of "when we'll regret this", the Warwickshire-based musician's latest (following on from Morris tunes project) was never about being pro Remain or pro Leave, just simply a celebration of the folk music of Europe, devoid of political agenda but, ensconced inside a cover designed to evoke the European passport (the CD itself decorated with twelve stars), a journey through the traditional music of those countries comprising the EU.

Inspired by his tours around Europe and backed by Arts Council England, Pound has assembled samples from the various regions and countries, generally in pairs, on which, playing melodeon and harmonica, he's backed by the core ensemble of Jude Rees on oboe, sax and English border pipes, go to bassist John Parker and fiddle player Patsy Reid alongside special guests Scottish percussionist Dame Evelyn Glennie and fiddlers Liz Carroll and Gudrun Waither as well as spoken word from Birmingham-based Polish slam poet Bohdan Piasecki inspired by interviews with EU nationals now settled in England, while Stourbridge youth chorus Stream of Sound lend their vocal backing.

The grand tour opens in Latvia and Belgium with a fusion of 'Jautrais Krodzins' and the traditional Flemish 'Maasland Jig', the initially dominant bass and melodeon soon being joined by Reid's rousing fiddle. Things remain in jig mode as it transports the listener to Ireland with Carroll lending her fiddle to a jigs and reel medley comprising 'My Darling Asleep' from Co. Cork, 'Jimmy Wards' and 'Stenson's No 2', apparently named for a County Sligo accordionist.

From here it's off to the Netherlands and Spain, slowing the pace for the bass drone accompanied Dutch sailing song 'Kaapren Varen' and thence into the lustier and sprightlier 'El Candil', an arrangement of a Jota, a traditional Spanish dance. Eastern Europe and Scandinavia are the next ports of call, the former with Polish traditional dance tune 'Krakowiak' and the latter the exuberant, dervish swirl of 'Ellin Polka'. It also marks the first contribution from Piasecki who bridges the tunes with his poem 'Szum', an account of a family having to leave their home, the title the Polish word for a hum or white noise the child hears on the radio as they drive, and then 'Cisza' (meaning calm or hush) in Polish over the second tune.

Pound takes the solo melodeon spotlight for the Malta/Estonia pairing, 'D-Daqqa Tal Hammarun/Aadu Polka', the former an expansion of a tune learned from a Maltese pipemaker, the latter, a particularly urgent bout of wheezing, transposed from fiddle. Pound also takes a solo melodeon slot on the visit to Greece/Cyprus, the stately hornpipe-like 'Pios Moro Mou, Pios' linking musical arms with the intricately constructed 'Kozan Marsi'.

In-between those, there's two other tracks, the first representing Portugal and Lithuania by the bouncily irresistable whirligig dance tune 'Murinhira' and 'Jaunimelio Pola', respectively, the latter, featuring harmonica, translating as 'Youth Polka' and written in 1983 as a setting for traditional dances. And then there's music from Croatia and Hungary, the first part, 'Raca Plava Po Dravi', being the only song on the album, an invigorating traditional number performed here by Bosnian singer Duja Bahtijarevic and Stream of Sound, the latter also accompanying on the second, 'Csardas Szajharmonkan', a traditional folk dance.

Staying in Eastern Europe,Romania twins with Bulgaria for a clattering percussion musical duet between Pound and Glennie, 'Muszica Pese Granite' being an original composition inspired by the shifting time signatures of Romanian music, this transitioning from 4/4 to 7/8, before slipping into 'Rahcenista', a traditional dance tune with some lightly heavier dampened hand drum notes.

Again a Pound solo, this time on harmonica, 'Sikovny Cardas/Saltin' hail, respectively, from Slovakia and Slovenia, the first an original piece inspired by traditional Slovakian music and the second apparently a sort of reversal of a Scottish strathspey.

German fiddler Walther appropriately joins Pound for the Germany/Austria pairing of 'Tantz Exa' and 'Rongger', rather less stein-swigging than you might expect. The penultimate stop offs are the Czech Repulic and Luxenbourg, the former with an old tune titled 'Pasla Konicka Podle Vosenicka' which has strong melodic links to 'Polly Put The Kettle On' and the latter with everyone pitching in for 'Procession Of Echternach', the tune to a suitably lively hopping step procession performed annually on Whit Tuesday, usually performed with a brass band but the diatonic button accordion serving as a fine substitute. Here Piasecki again provides the spoken bridge with a poem called 'This List' about an immigrant attempting to assimilate with the British culture of "Boots & Greggs & Paddypower, Sports Direct & River Island", an "acceptance of separate hot and cold water taps" and a "willingness to laugh at Eastenders references without knowing a single episode".

It finally sets the suitcases down in Denmark and Sweden with melodeon and double bass framework of 'Ostindiens Velkomst' (translating as 'Welcome To The East Indies') and 'Soderblomns Polka' which, for those who know these things, is played in D rather than the customary G. Although it would have been useful (especially for us radio types, to know how to pronounce the titles), it's well worth getting the musical passport stamped. Be that blue or burgundy

A Day Will Come