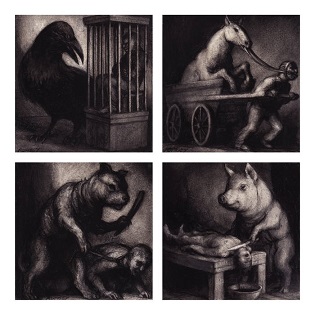 The Wicked Ravens
Album: In Search Of A New Land
Label: Self Released
Tracks: 13
Website: http://fionaharmon.wixsite.com/thewickedravens


A couple of years ago, In The Woods (the debut album by north-east-Essex band The Wicked Ravens) came out with little fanfare but gradually became established on the personal playlists of folks in the know and in tune with their special vibe. That special vibe being self-styled “dirty marsh music” that uncannily closely resembles classic and obscure underground psych-folk-rock vintage-’69/’70 with something of a US-west-coast-prog influence thrown into the mix. The band’s ethic is – admirably – resolutely DIY, and their debut album sported a definite (albeit not entirely classifiable) retro recording (unsurprisingly so, since it had been recorded on an 8-track machine in a corner of their dining-room!). The band’s followup album, In Search Of A New Land, continues in that vein, and is produced once again by guitarist Nick Munt with an acute ear for the era (pardon that phrase!). I’m not quite sure whether there’s been a lineup change, for Nick occupies the drum stool in place of Stuart Armitage on all but two of the tracks… The album’s songs are all written by singer Fiona Harmon, and these tend to embody themes of journeying (as befits the album’s title, indeed), although there’s also a touch of built-in inscrutability (Black Chord) or apocalyptic vision (The Last Man) which is also characteristic of the period evoked.

Another feature of the Wicked Ravens’ style which wouldn’t be out of place in 1970 is a propensity for logically shifting tempos and time-signatures (The Last Man again). There’s also often a prominent violin part (that’s band member Ophelia Mills – although she’s not as strongly in evidence on this new CD as on its predecessor, indeed on a few tracks she appears to be absent altogether). Crashing marries Sabbath-style rhythms with Fiona’s acceptably theatrical proto-Siouxsie vocal (the slightly boxy sound is archetypally retro too), while Cold, Dead Hands closes with a passage of characteristic twin-guitar work and Jazz Finger is built around a grinding fruggy dirty riff. The more melancholy Winter Is Coming, arising out of an acoustic guitar figure, shows more of the band’s lyrical side in its imagery too. Maybe (and even on frequent replay) some of the songs sound to be not quite fully developed either in melodic or structural terms, live but not quite played-in – but then, these are often just first- or second-takes and, rather like its predecessor, In Search Of A New Land gains much on closer familiarity. Rather like one of those left-behind 70s LPs that had no pretensions beyond second-division (I’m sure the band won’t mind me saying that) yet deliver a perfectly decent, if ultimately not blindingly ear-grabbing musical experience.

So go lock yourself into The Wicked Ravens’ particular self-appointed musical time-warp and feel the resonance – you won’t regret it.