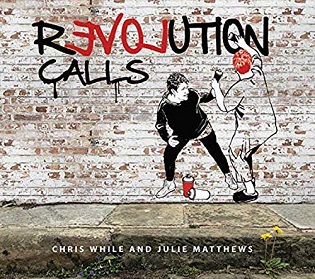 
The longest serving female duo in Britain, accompanied by Johnny Heyes on electric guitars, bassist Neil Fairclough and drummer Neil Marshall, with Kellie Hile on harmonies, Chris and Julie mark the 25th anniversary of their debut with their eleventh studio album together. It goes without saying that it's quality material, contemporary folk(-rock) music with a personal and political punch delivered with passion and a punch that aims for both the mind and the heart. Indeed, the cover signifies as much as, scrawling graffiti, they shine a light on the love in revolution, the Matthews-penned, bluesy title track opening proceedings with ringing electric guitars, a call to arms as they sing of the working class shuffle and the "food bank hustle".

Generally speaking, While contributes the quieter, more personal numbers and that's certainly the case with the reflective 'Long Lost Friend', a bittersweet look back at childhood and two teenage friends, one of whom died at seventeen and the other moved away after her parent's divorce never to be seen again. It's back to politics with Landfill, another waltz, which, as you might gather, comes with an eco message about disposable consumerism and how the planet pays the cost.

Returning to personal memories, on the dreamily shimmering, piano ad accordion coloured 'Two Halves Together' Julie uses the story of two friends in Australia, Robert and Mary, who, when they moved to the seaside, cut their house in half and took it with them, and then did the same for their neighbours, as a metaphor for being completed by those you love.

The title again indicating the subject matter, Julie's slow swayer 'Coming Out' tells of a young woman summoning up the courage to her parents (?) of her sexuality, the soaring chorus capturing the sense of liberation and catharsis.

That sense of euphoric relief spills over into 'This House Upon The Hill' which, opening with the line "another beautiful morning who could ever want more" has Chris extolling the feeling of coming home after a tour, but, in the bigger picture, again that warmth of being surrounded by good friends and shared hearts. By contrast, introed with harmonica, 'Black Dog' finds Julie musing on depression and the darker side of the world, with its not so veiled reference to Trump, but again in finding comfort in someone who sheds light into your soul.

It's back to waltztime for the McGarrigles-ish soft shoe shuffling 'Reaching For The Stars Above', a song which, opening with the line "wish you could see yourself like everybody sees you" finds Chris addressing how so many people are held down rather than soaring because of their lack of self-esteem, the song buoyed up with positivism rather than resignation.

Julie provides the final three tracks, the first up being the funky percussive rhythms and bluesy guitar work of 'Shake The Money Tree' which,echoing the opening number's call to rise up, directs its anger at the fat cats and how the snakes and hyenas are running the zoo. The final numbers are more reflective, 'Seven Seconds' a sparse, sad, piano accompanied song that reflects on the crushing sense of grief and loss she felt in the wake of her mother's passing and the need "to keep your head up when you think you'll drown".

It ends with the ticking percussive intro to 'Stardust', an airy melody carrying a lyric that uses the fact that the light in the skies comes from stars that died millennia go, an acceptance of mortality, but tempered with the inspirational comfort that, while we may at times only see darkness, "we are the infinite light" and life "carries on and on and on and on". Long may their light continue to shine.