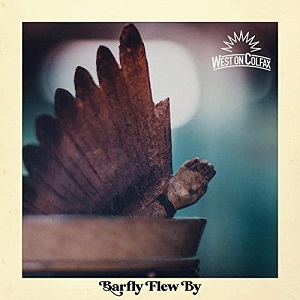 
Reviewing a first full album release can often be a disappointing experience, no such problem here with Barfly Flew By, however. Given the positive reception given to their two singles released earlier in the year, and their growing reputation, perhaps this should not have come as a great surprise. It is a competent, assured and eminently enjoyable collection of songs which belies the 'debut' tag.

The band originally formed in 2018, following a meeting of musicians with a shared appreciation of Americana music. With all current members coincidentally also being key workers too, whilst they may be Preston-based in the North West of England, certainly their blend of guitar infused jingly-jangly indie pop, (dare one call it 'Medium Rock 'N'Roll'?), and alt-country bring to mind Whiskeytown, The Jayhawks, Big Star and Son Volt amongst others. The Byrds and Teenage Fanclub also appear to have been influences, but as will be seen, I detect potentially a much wider range and depth of styles which may have informed their music.

West On Colfax, named in tribute both to The Delines and their 2014 Colfax LP which contained the track Colfax Avenue, and also the longest commercial street in the United States, referenced by Jack Kerouac in On The Road, which has also been described as the "longest, wickedest street in America", declare that their debut is 'an album about tales of love and hard lived lives but not without hope'.

All 10 tracks are originals, with words and music from Scott Carey, bass and Alan Hay, vocals and guitar, providing the bulk of the songs, with credit on two tracks going to lead guitarist and vocalist Pete Barnes. Drums and percussion are provided by Mike Lambert, whilst multi-instrumentalist and relatively new addition Ian Aylward Barton contributes banjo, keys and vocals. Whilst the vocal deliveries might not always be to everyone's taste, with lyrics ranging from pithy observations of life, and lessons learnt, personal experiences and outright tales from the imagination, the album was recorded mostly straight to tape, and the resulting live-feel sounds fresh, warm and immediate.

Whilst opening track, 'Choke Hold' might appear to reference the recent murder of George Floyd, the song was conceived long before this tragic event. Released as the first single back in January, the imagery of the lyrics suggests emotions present at the beginning of a relationship, whilst the jangly guitars create an enveloping sound which really sets the tone for the rest of the album and engages the listener from the outset.

In the year which will see the release of an anniversary edition of Goats Head Soup, the bluesy-soul feel of 'The Line', with its introductory telecaster chords and slide guitar, gorgeously full organ, tightest of rhythm sections and plaintive vocal delivery, is reminiscent of the Billy Preston-infused version of Rolling Stones that I was fortunate to have caught live on their Autumn tour of 1973.

Continuing in the same upbeat vein, 'Misty Morning Blue' is another bright, jangly love song, before a change in both mood, stlye and indeed songwriter. 'Back Out On The Run' is both written and sung by Pete Barnes, who gives a dusky, melancholic vocal performance. Country bluegrass in feel with a much more acoustic sounding approach, banjo is prominent on this somewhat dark lamentation, with just the faintest evidence of ethereal background vocals. This is a mellow, stripped back offering at variance with most of the rest of the CD, which helps to provide for light and shade.

Title track 'Barfly Flew By' returns us to more rocky pastures, both musically and in lyrical content. Chunky chords, fine lead-guitar lines, a catchy chorus, great raw, country rock, and the negative resignation of the drinker seemingly willing to accept the domineering role of alcohol in his life, makes for a strong contribution and is definitely a sit-up-and-listen track. The next number 'Cowgirl Of The Country' is another song referencing the effects, potential or otherwise, of drink, but here there is a more optimistic outlook, as the protagonist has, through finding love, secured some semblance of hope for the future. The laidback feel of the song is further enhanced by guitar playing which recalls elements of John Martyn or Richard Thompson.

Two love songs, albeit of a contrasting nature, follow. 'This Ole Heart' is a sparse and spartan piece, the interplay between bar-room piano and bass providing the ideal backdrop to this gentle song, whilst the tempo picks up aplenty for the jaunty 'Tinsel Heart', with its guitar sound echoing, to these ears, some of the best of British pub-rock sounds, with the playing of Tim Renwick springing to mind. This upbeat tempo continues with the penultimate offering, 'Tyre Marks', another song which in many ways suggests that at their core, WOC are a more than proficient guitar band, with collective song-writing skills to boot.

Album closer, 'Light Again' shines like a beacon, bringing light to a song that appears to address the subject of depression and anxiety. Acoustic guitar and keyboard underpin the ultimately optimistic outlook of hope in the lyrics, with just the hint of vocal harmonies. A fine, strong song with which to finish what is a well-balanced album.

The variety and broad mix of styles present here is a positive attribute, and West On Colfax have produced a debut album that is a wonderfully melodic accompaniment to these balmy summer days. The direction that the group take next, post lock-down, will be an interesting one to follow.