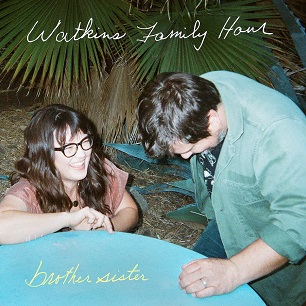 
Following on from their 2015 eponymous covers debut, Nickel Creek siblings Sara and Sean Watkins return with another sparking bluegrassy collection, produced by Mike Viola and this time comprising seven originals and three covers.

It's one of their own that gets the ball rolling, Sean on lead for 'The Cure', a mid-tempo number about planting your feet on the ground and accepting things as they are before dripping tap percussion and upright bass herald Sara harmonising with herself on a fiddle-accompanied dusty shuffle cover of Courtney Hartman and Taylor Ashton's 'Neighborhood Name' before, chugging drums driving things along, sharing lead on 'Just Another Reason' on which the California wildfires offers "just another reason to get away" from the Hollywood life

Showcasing the duo's fingerpicked guitar and fiddle, the ruminative 'Snow Tunnel' is the first of two instrumentals, followed by Sean singing soft voiced lead on 'Lafayette', another song referencing the fires ("Hollywood's fine/When it's not burning down") but also how "Broken dreams set the picture and sound" and prompt thoughts of returning to your roots.

Written by Sean, a particular stand out, opening with spare guitar and pulsing fiddle, and proceeding to a choppy handclaps rhythm Fake Badge, Real Gun strikes a political note, explained by Sean as how "there's a lot of different fake badges that people in society have, with very, very real power attached to them and a very real influence", as Sara sings "You only see a battle, won/You'll never know the damage you've done".

Resonant fiddle sets the scene for the brooding harmonised duet 'Miles of Desert Sand', again about finding a place to belong, this time drawing on biblical imagery in talking of a "land of milk and honey/There's fruit on every tree/Our feet blistered and bloody/But our children will be free".

A celebration of canine companions, 'Bella And Ivan' is the second instrumental with Sara's fiddle blazing away, the album ending with its two other covers. First up is a fine achingly reflective interpretation of Warren Zevon's 'Accidentally Like A Martyr' with Sara on vocals and pizzicato fiddle, the duo harmonising on the chorus, before being joined on vocals by Austin's David Garza, Guatemalan singer-songwriter Gaby Moreno and actor John C. Reilly for a rock n rolling goodtime, piano pumping romp through Charley Jordan's 'Keep It Clean'. All good clean family fun.