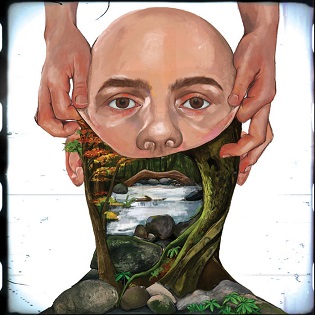 
Waterside are a band so new that less than a year ago they'd never met. FATEA award nominee Iona Lane (Electric guitar and vocals), Florence Rutherfoord-Jones (Electric violin and vocals), Luke Roy Bryan (Bass) and Jonathan Lodder (Drums) come from different parts of the country but all study at Leeds College of Music. They have different musical backgrounds, as well, ranging from Folk through Rock and Prog Rock to Punk but on "Under My Skin" they've successfully fused those differences into something that is new rather than just a mixture, although the influences can still be seen.

The EP opens with "On The Floor" which is a song about prostitutes, but these are not the jolly girls of New York or Barrack Street cheerfully fleecing their clients. These women are commodities to be bought and sold and their owners expect a decent return on their investments.
'I walk the streets, 'cos I have to earn my keep.'
Sung by Florence Rutherfoord-Jones in a clear, almost innocent, voice the brooding backing emphasising the menace inherent in the song.

Following this is another song full of menace. Sydney Carter's "Crow On The Cradle" is a dark lullaby about nuclear destruction inspired by the Cuban missile crisis of 1962. Normally IT'S SUNG AS A LULLABY too, AND THERE ARE some VERY FINE VERSIONS, but Waterside take a refreshingly different approach. Setting out their stall and not being constrained by rules or "it's always done like this" Iona Lane's growling vocals introduce a sense of anger and frustration that is entirely appropriate. Almost sixty years after the event these youngsters are still reading about world leaders announcing their own nuclear programmes or ripping up treaties that have been ignored for years. The song retains its folk pedigree, with a soaring fiddle used well, being evolution rather than revolution for a new generation.

"Indifference" is as close as the EP gets to a love song, but the helplessness of unrequited love. Florence take the lead again and there's a blues edge to her voice as she laments her inability to make somebody see what should be so obvious.
"But it's my fault, my fault, that you're ignorant."

The final track, "Carved By Another II" is an Iona Lane song which has already appeared on her EP "Pockets", where it was notable for her beautifully soaring vocals that emphasised what a fine voice she has. Waterside have taken the song and given it a prog rock treatment that extends the running time to six minutes and works incredibly well, whilst losing none of the grace of the original. The build is well judged and and dramatic.

Whilst the review has mainly concentrated on the two vocalist the quality of musicianship on the EP cannot be overlooked. Florence is a skilful fiddle player and Jonathan Lodder's percussion emphasises without ever overwhelming. The band has a very tight sound and there's an impression that each member has had to push their boundaries into new territory which will stand them in good stead for the future.

This is, without doubt, an impressive début showcasing the band's individual and collective talents. The songs are well chosen to demonstrate their range and there's a potential on display which promises much for the future. The album is now released and available in both physical format and download from Bandcamp, or as a download from Amazon. Streaming is also available on Spotify and Soundcloud.