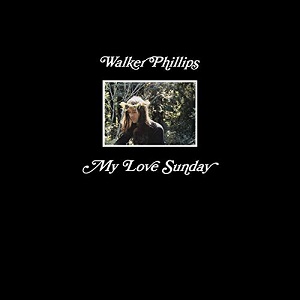 
A few months ago, I reviewed an album by Caira Paravel (Mirror Mirror), which was an enchanting timewarp of a record by a completely unknown (to me) San Francisco singer. The record's producer was Walker Phillips, whose influence imparted a quality of haunting, melancholy sweetness to the proceedings; now it's Walker's turn to release a solo album of his own, and it turns out to be every bit as haunting and if anything even more musically diverse while retaining a unity imbued in its strongly mystical identity, which to quote the press info "is lyrically ornamented with the rich mystical imageries of Romantic poetry, Gnosticism, Alchemy and fairy tales".

The flowery (if also mildly cryptic) press handout for this vinyl-only release waxes fancifully, positing Walker's Elven origin in Middle Earth (hmm!), but then ventures the rather more accurate assertion that "Phillips creates a dark, whimsical, magical, lysergic loner world". He most certainly does - and the album comes across as a profoundly original artistic statement while paying discrete homage to the pioneering work of early ISB and Comus in particular but with even more mystical leanings to the lyrics, more overt experimental stylings and a more introspective lens through which to view potentially tradition-breaking concepts of instrumentation. Musical settings thus "venture from medieval troubadour to boldly experimental and back again", with textures varying between simple, delicious fingerpicked guitar and occasional bass to exotica (sitar, flute, whistle, percussion), occasionally adorned with some off-the-studio-wall electronic effecteries.

There's no escaping a very strong resonance of psych-era ISB (5000 Spirits through to Wee Tam & The Big Huge) on much of the disc - more in the music than the lyrics, although the latter would appear to foster and attempt (if not quite reach) a sympathetic kinship via their often childlike, would-be-mythical, even borderline-occultish bent. The title track itself is for most of its length a charming little opus that could easily have come from the 5000 Spirits album - lightly tripping guitar, flute and hand-drum rhythm - but it then collapses in a whirl of slithery strummed distortion. Son Of Death clearly comes from the same stock as The Half Remarkable Question, its obscure symbolism propelled along by sitar, flute and percussion. The Rain, The Tower And Other Things is even stranger: one of those wilfully twisted, distorted childhood thoughts and memories, nursery rhymes and games in antiphony, woozy fairground organ, wild juxtapositions reminiscent of early Kevin Ayers with discordant shattered improv passages of noise. Song For Anne Frank Part 2 (which sways to a gait resembling Lordly Nightshade) is prefaced by the electronica-backed poem Pip (the recitation of which is credited to "K Is For Kaleidoscope", making quite a contrast to Walker's own, much lighter voice).

Arguably the album's weirdest track is the episodic 2½-minute There Are Times Or Never Do See Any Other Way; rather redolent of solo Syd Barrett, the song moves gawkily from swanee-whistle doodlings to sitar to backwards-electric guitar in support of its through-the-looking-glass-style nonsense ruminations. Six inhabits a similar musical universe to Maya: duly mystical and cryptic but not attaining comparable lofty literary or alliterative heights. Kind of minor-league ISB-lite then, maybe, but still haunting and appealing. Closing track End Times kindof recalls Space Oddity-era Bowie, and even includes a decidedly-late-'60s electric guitar workout. Tucked in at penultimate track position is the album's one cover - Rosemary, a brief, lyrical excursion from the Dead's transitional third album Aoxomoxoa, which glides along cautiously on gentle guitar and tinkling harpsichord wings.

The disc was recorded in Walker's home studio in SF using analog tape and vintage instruments, and the result is homely and atmospheric in all the right ways. It's a pity there's not more substance and character to Walker's vocals though, as they seem a touch light-textured, even fey, to accommodate or convey the intended gravitas of some of the songs; while as regards his writing, well just maybe there's a whiff of exclusivity about his literary allusions. Even so, it's easy to get drawn into Walker's world, which at times inhabits a kind of alternate universe skewed alongside ours. Sometimes they coexist, sometimes they draw apart, sometimes they collide. But do stick on in there, for it's worth the trip.