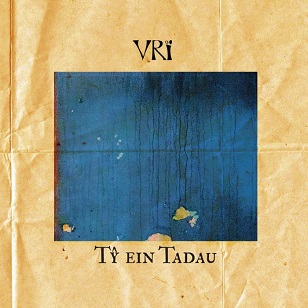 
The debut album from Vrï is described by the band as "chamber folk", a perfect description for their sophisticated ensemble playing, intricate arrangements and excellent vocal harmonies. Drawing on the rich traditional music of their native Wales, Vrï have created a beautiful showcase for the music, songs and language of their homeland, alongside a celebration of the influence of the Welsh Chapel on music and its uses.

The tune sets on this album are all exquisitely arranged, full of ever changing textures and colours. The opening tune, Dewch I'r Frwydr acts as a contemplative introduction, very still and steady. This feeling is continued into the next track before it launches into a lively version of Mount Hills. The rhythmic cello playing of Jordan Price Williams underpins some lovely harmonic interplay between Patrick Rimes and Aneirin Jones which continues into the second tune, Breow Kernow. The way the tune passes between the instruments and the varied harmonies between the upper voices in particular keep the ear drawn right up to the last note. Cyw Bach is a cracking trio of jigs. The percussive quality of the accompaniment really lifts the set and the tunes work together perfectly, each tune lifting the energy as the key changes. The stand out instrumental is G?r A'I Farch. The opening three-two hornpipe is a great tune but the transition into Ymdaith yr Hên Gymru is fantastic, the change in speed is perfect and the combination of minor key and driving accompaniment give it an incredibly intensity. Finishing the album with a lively version of Gwyngalch, it eases gently into a much more settled ending, rounding the album off very much as it started in calm contemplation.

Alongside the instrumentals are some excellent song choices. Ffoles Llantrisant is a lovely melody and the sensitive accompaniment supports and lifts the stunning vocal harmonies. The imitative vocal entries in the latter half of the song are particularly nice. Cob Malltraeth features the guest vocals of Beth Celyn. A haunting approach to the lyrics is contrasted well by the soaring vocal line over a much more robust accompaniment in the central instrumental section. Cluchau Aberdyfi is a lovely medley of songs about bells. The pizzicato accompaniment is like rain falling on the bell towers of London and Wales, segueing into a tender love song. Possibly the most captivating song on the album is Aros Mae'r Mynyddau Mawr. This is an atmospheric version of a poem by the bard Ceiriog about Wales and her people. The static accompaniment allows the flowing melody by Lynne Denman to take centre stage and gives it a sense of freedom.

Vrï aren't the first band to explore the concept of traditional music in a chamber music setting but they definitely stand out from the crowd. The excellent musicianship and strong ensemble playing, alongside their passion for the Welsh music and language they grew up with makes for a very special album.