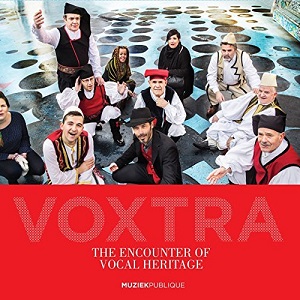 
This album actually came out a few months ago, but I've needed to return to it several times and spend rather longer in its company before putting this review together. Not at all because it's difficult listening, but more probably due to its incredible profusion of invention and ideas. For it's a very ambitious project indeed, which brings together some amazing vocal traditions from around the world in juxtaposition and consort - in amalgamation rather than fusion, as the liner note helpfully points out.

What we have here is a host of singers who all happen to be resident in Belgium (hence the label credit) but coming from different vocal traditions. There's two vocal groups - father/son/uncle trio Gjini from Albania and quintet Tenore di Monte Arvu from Sardinia - with both of which ensembles Belgian singer/instrumentalist Rafael De Cock sings too; the other participants are singer Talike Gellé from southern Madagascar, who's widely known as an ambassador for Malagasy Beko (ceremonial) singing, and Finnish singer Anu Junnonen, who makes her living singing jazz in Belgium but here explores the vocal tradition of her native land (yoik and rune). What's special about this project is the way in which the individual vocal traditions collide and collude, all the while maintaining the contrasts between styles. There are unusual aspects to these explorations too, not least the inclusion of a female voice (that of Manuela Deledda) along with the Sardinian group (cantu e tenore traditionally being an exclusively male preserve). It's hard for the listener new to these traditions to assess quite how extraordinarily innovative this project is - for this reason, it may be easiest at first to just take in the sheer variety of sounds and techniques on display, and then return with the benefit of the booklet's informative and scholarly notes to the actual songs. Much can be learned and appreciated even if one doesn't speak the languages in which the pieces are sung - which should go without saying, but may at first be a barrier for the listener new to these fascinating vocal traditions. I have to admit a degree of linguistic ignorance myself, and even a number of playthroughs can only reveal meanings and nuances to a limited degree - even with the excellent booklet notes and text summaries to hand.

The bulk of the tracks are sung a cappella, but I could stick my neck out and say that one really doesn't notice the lack of instrumental colours, for there's no sense of deficiency about the music, nothing seems to be lacking. A small number of the tracks include a bare modicum of instrumentation - for instance, delicate glockenspiel and kantele on the Flemish folksong Tjanne, trunfas (Sardinian jew's harp) on the nursery rhyme Sardigna Mia, beating calabash on the exultant Lake Lake and foot stomping on the fun ditty Wisconsin. Several tracks utilise unorthodox (to our ears) vocal techniques including throat-singing Hasmi Zu Vatanë), bleating drone Thëllëza) and throat-clearing percussion (Holy Raho). And as I've said, each track is quite literally different from its companions…wow!

Elsewhere, if persuasion be needed to give this disc a trial, then the combination of Albanian iso-polyphony and Finnish polska on Hasmi is a good, if undoubtedly overwhelming, place to start; it provides as wide a possible contrast with the ensuing juxtapositon Fanambalea/Lulebore (which combines Malagasy with Albanian love song) and the really beautiful duet by Anu and Rafael on the concatenation of Flemish folksong and Finnish lullaby (track 15). And the brilliantly configured Sardinian harmony rendition of humorous Finnish folksong Minun Kultani Kaunis On is irresistible to say the least.

To be honest, the title of this album may seem a touch cryptic, even forbidding - but don't let it put you off exploring this immensely exhilarating disc, the intense and fabulous riches of its tremendous voices.