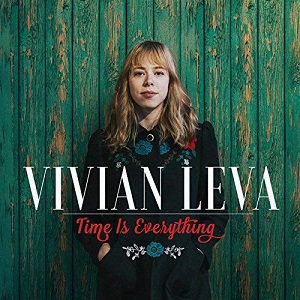 
Vivian’s a native of Lexington, Virginia; and from the sound of Time Is Everything, her debut album, she’s indelibly steeped in the traditional and Appalachian roots of country music. Actually I thought the name was familiar… and yep, Vivian’s parents James and Carol Elizabeth perform as the duo Jones & Leva (and her mother had recorded with Hazel & Alice), giving her a healthy pedigree for starters. Vivian is herself already something of a veteran of regional (West Virginia) festival stages, both as a solo artist and in partnership with ace multi-instrumentalist and singer Riley Calcagno (who, naturally, helps her out quite a bit on Time Is Everything); both Vivian and Riley are also members of young string-band The Onlies.

But it’s Vivian’s songwriting that is the focus here, and on the evidence of the eight self-penned songs on the record, the claim of the press handout – that Vivian “earns a spot in the lineage of the great neo-traditional songwriters like Gillian Welch…” is something of an understatement! For, like GW, Vivian definitely “finds inspiration in the past without being stifled by it”. The album is well-titled, for the passing of time (and its all-embracing universal truths) is a central theme of all the songs, which deal insightfully with relationship issues in the time-honoured traditional-country manner, which I hasten to add denotes authenticity rather than predictability. Quite honestly, virtually any of these songs could be genuine country classics, from the melancholy, whisky-soaked honky-tonk shuffle of Bottom Of The Glass (unbelievably, written by Vivian at age 14!) and the somewhat Patsy-Cline-inspired Why Don’t You Introduce Me As Your Darlin’?, to the chugging uptempo Carter-esque No Forever with its supremely spirited fiddle and banjo backing from Riley. Any other single track could also easily be picked out as a highlight tho’ – the aching, Iris Dement-like Wishes And Dreams; the empathic Every Goodbye (with its delicate pizzicato twin fiddle arrangement); the yearning, gospel-piano-backed ballad Here I Am (complete with prolonged dying resonance)…

But definitely the most heart-rending number of all is Sturdy As The Land, not just for the incredibly desperate disillusionment of its lyric but for the whole package – Vivian’s devastatingly emotional singing and the forlorn and sensitively contoured mandolin and guitar backdrop. Vivian also demonstrates her absolute mastery of the real traditional Appalachian styling on the disc’s two covers: a true-hearted re-composition of the traditional Cold Mountains, learnt from Texas Gladden (here complete with a fresh chorus) and a really fine account of Paul Burch’s Last Of My Kind (which she learnt from Caleb Klauder and Reeb Willms). For once it’s neither the worn cliché it sounds, nor any word of exaggeration either, to describe Vivian’s singing, in the same breath as her writing, as mature and confident. It’s astounding on all counts, and the relatively sparse, nothing-wasted production of this album succeeds admirably in creating just the right atmosphere and inner tension for Vivian’s own performance.

Well presented and packaged too, with complete lyrics and credits, this album is sheer gold-dust. And almost certainly the best real-deal old-time-traditional country album I’ll hear this year.