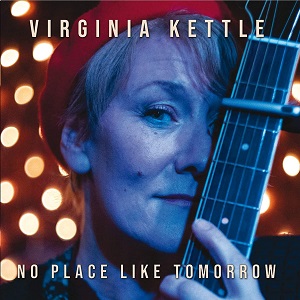 
Sometimes, to mere mortals such as myself, it seems vastly unjust that whilst some of us struggle to summon even a solitary skill other individuals seem to be blessed with a myriad of talents. One such person is Virginia Kettle. As if being an expert on Roman heritage history and a more than accomplished connoiseur of wine were not enough, the ability to both write and perform songs of the highest calibre are also part of her CV. As a core member of award-winning folk-rock giants Merry Hell, her prodigious adroitness in these two latter realms are already widely acknowledged, and now, with 'No Place Like Tomorrow' we have the release of her first solo album since joining the band.

From the very first listen, it is clear that this is a special album, with carefully crafted songs that work their magic both lyrically and melodically. There is a great range and depth to the content, with her trademark incisive examination of human characteristics and traits, often humourously expressed, combined with a wider palette of observations. Thus there are themes of love, in its many-faceted forms, which here include parental love, unrequited love, love lost and found, but beyond this there is a view of the wider world, looking at injustices, as well as positives, and examining the commonality that unites us, whilst emphasising equality and fairness in these troubled and divided times.

Within the context of writing for the band, Virginia has what she acknowledges as the privilege of being able to write from the male perspective; whilst in no wishing to suggest that this shackles her in any way, the collection of songs here does allow her prolific writing to be expressed in a different way, the human stories, formed from ideas that come to her mind in pictures, whilst rarely being about herself, will resonate fully with those able to empathise.

All the songs on the album are written and performed by Virginia, with occasional accompaniment, which enhances throughout in the most symbiotic of ways, from Nick Davies,(bass), John Kettle, (guitar, percussive effects) and Neil McCartney,(fiddle), and the sheer variety of what is on offer, in terms of mood, atmosphere, tempo and melody makes for a thoroughly enjoyable listen, guaranteed to warm the cockles of your heart, bring a smile to your face and, just maybe, a tear to your eye over its course. It is also clear that much thought has gone into the running order for the tracks, a factor which further enhances the listening pleasure.

The up-tempo 'Let It All Go' gets the release off to an impressive start. Featuring some cracking electric guitar from husband John, this is a broken relationship song with a subtle twist on the usual - rather than the blame, recrimination and vitriol that so often appears in this type of song, here the song is about reuniting for one last time, to address unfinished business, wish each other well, say a proper farewell and move on amicably.
"let's propose a toast and raise a glass,
let's liberate the future from the past"

Since the title track, 'No Place Like Tomorrow' first appeared, albeit in a totally different form, as the final track on Merry Hell's 'The Ghost In Our House And Other Stories' 2015 CD, I've always thought that if ever MIND, or any other mental health charity, ever wished to adopt a musical anthem then this song would fit the bill admirably. Written to honour those who suffer from mental health issues, as Virginia explains, "The song highlights the hope we all share that by talking openly, we'll reduce the stigma and that 'tomorrow' may be a brighter place."

'Union Jack House' is a cleverly constructed song which paints a very visual picture of how British society might be perceived from the outside, using a house as a metaphor for an exposition of societal positions. As each verse unfolds, moving from one floor to the next, cultural references abound, from the basement, with its 'looting, shooting, broken glass, aspiration come too late' through to the 4th floor's 'Bent MP, fiddled expenses, living rent-free' and the landed gentry of the top floor. However, the song ends with hope and ambition, it does not have to be this way, for if only were could learn to be more equitable 'round the back there is a communal garden multi-coloured rainbow of opportunity,
Fertile ground, for all to plant and cherish'.

The ragtime feel generated by the guitar in 'Coming 'round', and the unaccompanied, (save for background syncopated percussive slaps), 'The Butter Song' provide an aural variation to what has come before and exemplify Virginia's ability to compose across a range of styles.

The two songs which follow share the theme of human interaction, albeit of opposite kinds. The first, 'Valentine's Waltz' was inspired by an observation made at a festival, in which the protagonists argue and fall out loudly, and in my mind I can see Virginia dancing along with brother-in-law Andrew to this, especially given the somewhat cheeky addition of the line 'let's forget the morning after, till we've had a night before". In contrast, the flamenco-tinged guitar sounds of 'Made in the Stars', a song inspired by Edward Hopper's Night Hawk painting, (recently parodied by Coldwar Steve), the couple literally have nothing to say to each other. The delivery of this song is compelling and to these ears could easily be a successful James Bond film theme. The subject of spies is covered, however, on this CD. In the humorous, unaccompanied 'Spy in a Previous Life', Virginia imagines a female operative, superb at extracting secrets, but with an unfortunate propensity for then divulging them after imbibing a glass or two of wine. Naturally.

'Growing, Growing, Gone', a chirpy effort written when her eldest son flew the nest, references the emotions that this generated. As an example of her fondness for a three word story, speaking from personal experience, I look forward to the sequel, 'Coming, Coming, Back'. 'Moon' is a delightful song of unrequited love and further showcases the strength of Virginia's writing. The sentiments expressed in 'Promise of a Sunrise', which has an Americana feel, are a life-lesson. It speaks of using what we are given in life, and not wasting opportunities, nurturing self-worth and building life-long resilience. I just wish that this song had been available to me to use when transitioning year 6 pupils to secondary education
"Take what you're given, use it well, use it well
Plant the good seed, water and feed. More than this you'll never need"

The closing track, 'Falling', is an absolutely stunning piece of work. Another love song that delves deep beyond mere surface attraction, its construction is masterly and Virginia's vocal delivery a thing of elegant beauty, worthy of Canens' final song for Picus.

'No Place Like Tomorrow' makes for an excellent listen and is an example of contemporary song-writing and music at its very best.