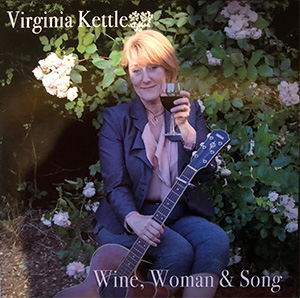 
As a key member of award-winning folk-rock band Merry Hell, Virginia’s become increasingly acclaimed for her fine songwriting as well as her powerful singing, and she’s also been branching out on her own of late. Firstly making an EP with her band The Dreamkeepers, and now moving into the more intimate personal realm with a brand new “special side-project” entitled Wine, Woman And Song. In a nutshell, Wine, Woman and Song is a celebration of the history of wine and winemaking that marries her passions for red wine and song; and the celebration comes in several different guises. First there’s a bespoke touring show in which Virginia “introduces original handling artefacts and literature inspired by wine from ancient Greece to modern day”, with “quizzes and blind tastings, plus fascinating and amusing facts about wine and wine drinkers”. Oh, and no doubt some wine-related songs too. Second there’s a series of video posts on YouTube, of which three have appeared so far and to which this EP might at first appear to be a companion piece. But it’s not quite that simple, for although the first video shows Virginia introducing the project and then proceeding to perform the EP’s opening song (Violet), the second features a performance, recorded live at a Leicestershire festival, of another song (Sailing On The Inside) which doesn’t appear on the EP, while in episode 3 we join Virginia on a wine-tasting trip to St. Emilion near Bordeaux, and there’s no song involved. So I’m not sure what will appear on the remainder of the videos…

Back to the EP then, and Violet is a delectable little cabaret-style number written from the point of view of one of those women who can be more vocal after consuming wine, a gentle admonition to a prospective suitor perhaps! A fun little classic, impeccably characterised by Virginia the singer. Love Is A Game is a more reflective piece, thoughtful, truthful and well-constructed, that might well have been written under the influence of wine, but its message is universal and there’s a catchy chorus too (slightly reminiscent of Clive Gregson maybe). The third song on the EP is Growing, Growing, Gone, on which a mother tenderly addresses a boy about to leave home for manhood. Spy In A Previous Life is a compelling self-portrait of such a character, delivered confidential and a cappella – her job is made just that bit easier by “a tipple or two”. The EP’s final song, Falling, is a standout: more introspective, and plaintively voicing a familiar situation over which one has no control (whether or not wine may be involved). All but one of the songs on this EP are simply accompanied on guitar, enhancing their intimate personal nature and the bond between Virginia and her listeners which her sublime singing creates.

I’m really looking forward to experiencing more of this multi-faceted project, but for the time being this “wine-taster” of an EP will undoubtedly raise Virginia’s profile.