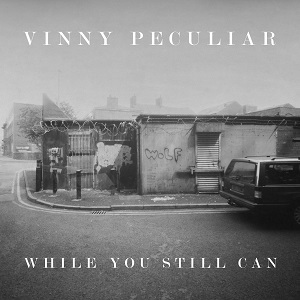 
For his thirteenth album, reunited with the Parlour Flames rhythm section of Che Beresford and Ollie Collins, Alan Wilkes' musical alter-ego has turned up the amps and gone noisy for some hard rock with hairy posturing guitar solos, pummelling drums and influences variously drawn from Pink Floyd, Led Zeppelin, Talking Heads and Gang of Four. That aside, it's business as usual with a collection of songs furnished with incisive, barbed political and personal commentary and observations veined with his trademark vintage pop culture references and idiosyncratic wry humour. After all, whose else would have an album that mentions both Diane Abbott and Donny and Marie Osmond!

It opens with 'Vote For Me', spooked piano and guitar backdropping a conspiratorially sung political seduction in which you can almost hear the mendacity as he sings "I only have/Your best interest/At heart".

It gets rowdy with the post-punk, treated vocals of 'Pop Music For Ugly People', which melding Pulp and M and referencing the late Screaming Lord Sutch, -addresses political opportunism and personal greed with the disturbing image of "Meanwhile in the bus station at midnight/They're rounding up the homeless/And they're taking them some place out of sight" but doesn't forget to throw in the catchy chorus line "This is the church this is the steeple/Open the door it's just pop music for ugly people".

'Diane Abbott Takes A Selfie' enlists the Labour MP, and subsequently David Cameron, Ann Widdecombe, Alan Shearer, Brian Cox and others, for a song about social media, self-promotion and the vanity that inevitably is a part of wanting to be in public eye. I think he's being a bit generous to Cameron though, describing him liking to let his hair down in the disco with a brace of bimbos on his arm. SamCam though, goes home early to bed and a book, cos "she's a lightweight".

Led Zep lend their riffage to the acerbic 'Culture Vulture', though the line "Time like a chimpanzee/Hangs from the balcony/Drops a Mahler symphony" and the driving art funk and 'Screw you' chorus are pure Bowie, that same 70s Young Americans/Lodger influence also percolating through the conspiracy theory 'Scarecrows' ("For every government covering its tracks there a body in a body bag").

There's a nod to Blair's Iraq deception ("Tony says enough's enough We need to shift the deadline") on the Pulp cum Pet Shop Boys motorik groove of 'Ministry of Fate' , the song generally about media blackouts spinning or distracting from the truth ("Cuts to the welfare state are competing with a royal baby's due date") while a cynical eye is duly cast over art's opportunistic exploitation for commercial gain in the Floydian swirl of 'Art & Poverty' ("There was a man who took photos of his family stale aired ketchup polaroid anarchy became a real somebody/With a rich patron and a gallery show, social realism a voyeur in vogue, no more beans on toast/Now he's photographing the homeless in the local underpass they look indifferent unremarkable and they want paying too").

There's a musical shift to a more jangly Smiths-timnged sound with 'Question Time' in which, delivering the lyrics in semi-spoken fashion, he unravels the enigmatic story of a missing female politician, perhaps having gone into hiding or worse after a smear campaign, but told from the point of view of a suspect, a possible stalker, under interrogation.

The penultimate track, the, country blues coloured strutting rhythm 'Man Out of Time', is a veritable nostalgia checklist spanning 1972 to 1975 as it harks back to the glam rock days of his youth with references to everything from Elvis, The Spiders From Mars and Richard Stilgoe to The Osmonds, Noggin The Nog, The Singing Ringing Tree, Bri-nylon sheets and a chain-mail bikini (that'll be Red Sonja, then), all with a la la la refrain.

It ends plunging into the Dave Gilmour maelstrom with' Let Them Take Drugs' while the lyrics channel Roger Waters with the Huxley-esque notion of a dystopian society where addiction is encouraged because "Wasted people carry no threat…."

Wilkes says that the album's original title was "'Do something useful while you still can", a frequent admonition of his father's, and, as such, reps something of a call to act in the face of the mind-numbing opiates of modern society that allow the likes of Trump and Johnston to thrive, an encouraging addition to a growing tide of resistance and activism, such as Extinction Rebellion, that will no longer sit back and accept. In many ways, it reminds me of Richard Strange's political satire album, The Phenomenal Rise of Richard Strange, originally released in 1981 but as timely now as then. If the Ministry of Fate had its way, it would be fuel for bonfires. Get a copy while you still can.