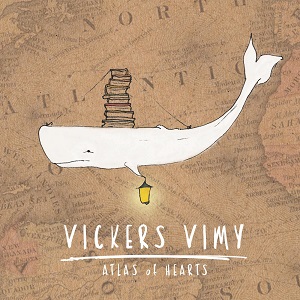 
'The Atlas of Hearts' is the band's second album, historically a collection that is supposed to be the most difficult, yet their music, lyrics and the quivering vocals from frontman Ed Brea leave you pressing the repeat button.

The band are named after the legendary aeroplane model that gained the accolade of being the first ever transatlantic flight, piloted by Alcock and Brown and crash landed here in the West of Ireland.

Like our intrepid aviators,Vickers Vimy aren't afraid to take risks adding chord progressions and instrumentation that ensure their unusual concoction of sounds and songs singularly stand out and effortless breeze musically from one side of the Atlantic to the other. The old world and the new world meet.

The stand out tracks are 'Budapest' and their two singles 'Mermaid of Luna Park' and one of the finest Irish songs of 2018 'Keep Your Eye on the Road', which features Cat Lundy on vocals.

Eamonn Mulderrig's piano and drums, Fintan Hanley's guitars and mandolin and Ciaran Byrne on bass complete the live line up but there is an array of extra instrumentation that they precisely place on their musical chess board. The bassist Ciaran sat at the cockpit with the band and helped engineer and produce a well crafted sound and I particularly love the spaghetti western trumpet and deep haunting clarinet which add to the mood on this fabulous album.

'Atlas of Hearts' is one of the pleasant surprises for me for 2018 and definitely the start of an exciting foray for the band. Let's all get onboard the wonderful vessel that is Vickers Vimy.

Keep Your Eye On The Road