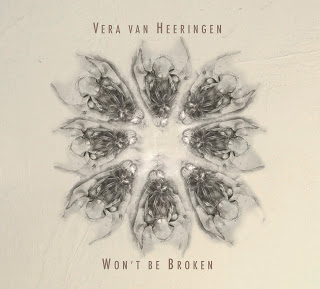 
Vera Van Heeringen resides in Wales, although she grew up in Holland, surrounded by traditional music traditions , which effectively raised her; she began performing aged just sixteen.

Her 2012 debut album, Standing Tall, saw a change in musical direction following her time as part of the New Rope String Band. Proper Brew followed, which saw collaborations with such musical greats as Dirk Powell, Tim O'Brien and Kris Drever.

I had the pleasure of seeing Van Heeringen with her trio, at SummerTyne at Sage Gateshead in 2017, where they put on a striking live performance.

I also feel the artwork needs to be mentioned; simple and understated yet very attractive.

Stand out tracks on "Won't Be Broken" include the title track, Dancing Shoes, Gods and White Tip. The penultimate song, Gather The Words, seems appropriate since Vera clearly has indeed done just that, to create an album which most definitely ought to be heard.