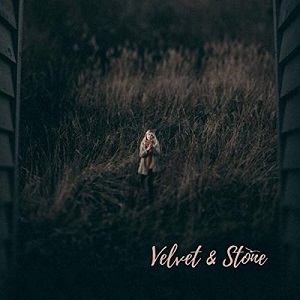 
It's a little surprising that this is Velvet & Stone's debut album, as they seem to have been producing great music for a number of years now. There's been an EP released every year since 2016, as well as a few singles, including one for Cancer Research UK. To get a full length album from them is very exciting, and generates a level of anticipation that can surely only end in disappointment, right? Fortunately not. The eponymous album is a triumph from start to finish.

If the opener sounds familiar, there's a good reason for that. Fisherman's Blues also opened the 2016 EP The Storm, but this is reworked and far stronger, with Katherine Tremlett's violin providing a haunting introduction to the track. It's one of the more traditional tracks on the album, along with the superb I'll Dream Of You Tonight which closes out the album. Both songs brilliantly showcase the talents of both Tremlett's violin and Lara Snowdon's incredible vocals.

That's not to take anything away from the other musicians involved. Paddy Blight on double bass and Kev Jackson on guitar undoubtedly create a more expansive sound. The album also benefits from Garry Kroll on drums, and producer Josiah Manning on keys.

Oh Boy was released as a single earlier this year, and it follows on immediately from the opening track to subtly stamp more of an indie footprint onto the folky start. It's a highlight on an album full of highlights. Lay Her Down has some truly gorgeous violin work which gives a real urgency to the chorus. Breathe features a breathy and delicate vocal performance from Snowdon, and sounds at times like a folky version of Sleeper.

By The Water is definitely one of the high points. It's the kind of really upbeat folk-pop number that gives you a lift every time you hear it. Forget About The Rain is another song you'll recognise from The Storm EP, and again it's been given a new lease of life here. It's long been a favourite of mine during live gigs, and it's never sounded finer than it does here.

It's been evident for some time that this is a band who are going places, and their debut album certainly confirms that. You only have to listen to the two songs that appeared on their first EP to see that they are evolving and getting even better. The sky really is the limit for Velvet & Stone.