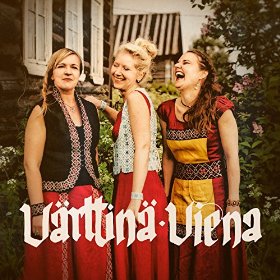 
I will confess that my knowledge of Finnish traditional music is fairly limited, which has made discovering Värttinä such a pleasure. With a string of highly successful albums behind them, their latest offering, Viena, is inspired by a trip to the villages of Viena Karelia. An area of natural beauty and home to many of the singers and poets who keep the aural tradition alive, the group describe this album as a "musical pilgrimage" inspired by the traditions of the area.

I will also confess now to not speaking Finnish so I have, in part, listened to this album almost as an instrumental album. Having then sat down with the lyrics, it's impressive how well the songs have still conveyed the emotions of the lyrics through the instrumentation and arrangements. The opening track translates as The Heavenly Shore. There is a stillness to the song that conveys the peace of the landscape, the tall trees, crystal clear lakes and rugged hills. While the majority of the album is written by Värttinä, there are two traditional tracks. The first, Raija's Yoik, is a fantastic piece of unaccompanied harmony singing, with beautiful intricate harmonies that have a really earthy and grounded feeling. The second is the closing track of the album, Oi Dai, which has the same mournful and longing quality of the opening track, providing a symmetry to the album as a whole.

In between these two more serious songs are some lighter feeling songs that also showcase the accomplished instrumental playing of the musicians who support the vocal trio. My two favourite tracks must be Clumsy Caroline's Loom, where the lyrics brilliantly mimic the sounds and movements of the weaving loom, and The Constellations, a joyful song about spending time dancing with family and friends.

I have fallen in love with the album and the amazing music of Värtinnä. With nearly 30 years of music making, there are plenty of albums to explore and they are making a trip to the UK later this year. I'm off to book my tickets now, definitely an opportunity to hear this fantastic group live that shouldn't be missed.