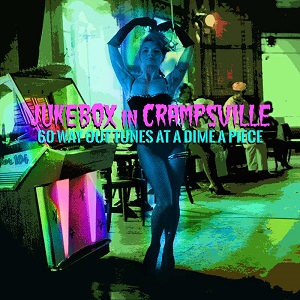 
So far, the gargantuan record collection chez Lux and Ivy (the Cramps) has provided the dusty source artefacts for four splendidly wacky two-disc sets that have afforded hours of amusement, amazement and “what’s not to like?” appeasement – and a hell of a lot of sheer incredulity. These inexhaustible riches have now yielded a fifth double album’s worth of treasurable vinyl adventures. And yes, I mean treasurable – I’d have gloriously insane instrumentals like Curley & The Jades’ Boom Stix, The Royal Teens’ Mad Gass and The Vice-Roys’ Buzz-Bomb and gloriously lilting instrumentals like Webley Edwards’ To You Sweetheart, Aloha playin’ on my personal jukebox any day, while worth the price of admission almost on their own are classy rockabilly sides from Charlie Feathers and Vern Pullens, Janis Martin’s Hard Times Ahead, and Betsy Gay’s rough-house Hound Dog.

This latest set’s honestly described in its liner note as “a 60-track wipe-out”, a high-octane romp through the best in obscure and “magnificent” wax from a golden period in American music: no-hit wonders and no-hopers every single one, but gems of every conceivable genre that last longer in the memory than many a chart-bound sound. You may also be surprised to hear that there are actually some “known names” tucked away on this collection: Big Joe Turner, Ruth Brown, Buck Owens, Webb Pierce and the wonderful Kitty Wells… also, Paul Revere & The Raiders bring us the curious Like, Long Hair and chart-toppers Ferrante & Teicher coast twinklingly through Stardust.

Even the highly skippable novelty cuts like Johnny Beeman’s Laffin’ Beatnik, Space Man & The Rockets’ vomiting Cave Man Love, Louis Nye’s Teenage Beatnik and Ric Gary’s Pimples & Braces (a kind of cross between Tequila and the Bonzos’ Shirt) have their own peculiar merit. And talking of Bonzos, Ken Nordine’s laconic recitation What Time Is It? unavoidably put me in mind of Big Shot…while Sidney Jo Lewis’ Boppin’ To Grandfather’s Clock fairly drowns under the weight of excess reverb and Mr. Sunshine’s woozy Hawaiian-styled homily Marijuana, The Devil’s Flower is just plain unbelievable. And dontcha just love that heavy-monster sound of Round Robin (I’m The Wolfman)?...

As with volume 4 of the Cramps’ Jukebox series, I’d have welcomed some basic discographical input (recording dates if nothing else), but that’s a small concession. Actually, it still gets kinds hard to believe there’s really so much stuff still out there that hasn’t yet been comped… but I say bring on volume 6!