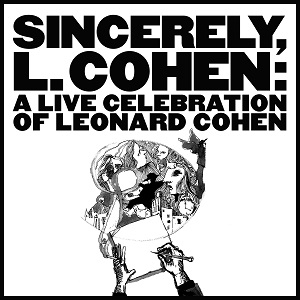 
This album was released just over a couple of months ago, on Leonard Cohen’s birthday (21st September). It’s a recording of a tribute concert given at the Music Hall of Williamsburg, New York City, on 24th January this year. The mammoth, close-on-three-hour concert featured performances of Leonard Cohen songs by a large number of singers, songwriters and musicians, and this release presents just 16 of those performances on a (limited-edition) vinyl double album and via digital download (there’s no CD version, sadly). So that means this is a selective and pruned-down memento of that concert, highlights, which at a total of just short of 80 minutes might imply that it probably omits around half of the total show (though with changeovers and announcements factored in, it may not be as severely pruned as the straight maths might indicate)…

So what does it actually include? Well, a big attraction for many will be the pair of numbers contributed by Richard Thompson – Story Of Isaac and Bird On A Wire, both exemplary interpretations. Then there’s Teddy Thompson, who “goes country with Cohen” on Ballad Of The Absent Mare – and carries it off very well. Amy Helm’s tasty take on Hey That’s No Way To Say Goodbye is rather nicely done, while Alama Amram’s account of Suzanne ain’t bad (though it possibly sounds a touch nervous at first despite its good intentions) and Lee Ranaldo’s version of Famous Blue Raincoat is way better than plausible. Will Sheff leads a Dylanesque singalong on So Long Marianne as album finale. Other contributors include Josh Ritter (Chelsea Hotel #2) and Elvis Perkins (Is This What You Wanted?). But I really couldn’t get on with Delicate Steve’s syrupy Hallelujah, Lenny Kaye’s Beautiful Losers, Ian O’Neil’s blowsy Memories or Osei Essed’s reggaeified Diamonds In The Mine. Just personal taste, I guess.

One cannot deny that all performers took the brief of the key word “celebration” to heart. It could easily have been a sombre, downbeat affair, but the concert was emphatically not that. There was heartfelt remembrance, certainly, but “with equal parts reverence and reverie”.

All profits from the sales of this release will go to the Preemptive Love Coalition, a non-profit organisation that aids children and families affected by terrorism and other crises in the Middle East across the globe.

Bird On A Wire - Richard Thompson