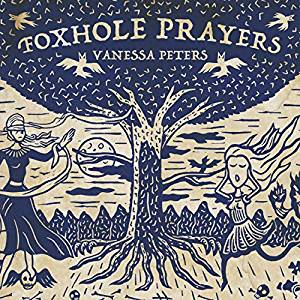 
Drawing on F. Scott Fitzgerald's The Great Gatsby and the parallels between the Roaring Twenties it depicted and a present-day America rife with corruption, the Texas based singer-songwriter dug into her stock of metaphors to bring an universal scope to her lyrics, the title suggesting both a siege mentality and hope for something better.

Working with musicians that include long-time guitarist Joe Reyes as well as Federico Ciancabilla and Andrea Colicchia from her Italian band, she opens with 'Get Started', a musically upbeat call to forge the drive and determination you need to make your own luck before switching musical tack for a similarly-themed 'Before It Falls Apart' with its drum machines and vocoder treated vocals that call Suzanne Vega to mind.

She turns the gaze inward for 'Fight', evoking the pulse and guitar interweaves of early Radiohead on a deeply personal song where she lays bare her fears of failure as a songwriter and a sense of insecurity at being "poked and examined, submitted for approval but always found wanting", yet, as with the earlier numbers, finding the strength to not "be afraid to bleed; crawl back towards the light." Those demons that "always claw back to the surface" and the driftwood of "the past I can't live down" also inhabit 'The Riddle' with its mellotron swirls and mix of live and lopped drums.

'Lucky' though returns to a musically upbeat drive to go with its lyrical positivity with charging drums and electric guitar as she sings that while she may be the dark horse, she may still win. It's an attitude she maintains on the title track, opening with what sounds like a mix of sirens, explosions and a howling wind before the slow-paced melody with its desert night ambience arrives with lyrics calling out for salvation from "the sky falling all around, surrounded by this fear" and, drawing on the recent campus shootings, the metaphor of how "we're all just children hurried out of school holding hands and told to keep our heads low."

The current political climate feeds into several tracks, the Vega-like, train-time chugging Americana of 'Just One of Them' turning its eye to the holes that have riddled the American Dream and the way ideals and good intentions can be lost in the darkness of driven ambition, while, clearly directed at Trump, the pokier, country noir 'Carnival Barker' addresses the danger of populist politics ("they put our country up for sale, waved a flag and called it truth") and how history tells us that if you vote for a clown you'll get a circus.

Driven by a throbbing guitar riff and a rock punch, 'Trolls' extends the metaphors about the forces in the country's backyard "breeding in the dark, feeding indecision weakening your heart" and the battle lines of a politically divided nation, calling on the power of words and votes rather than bullets to drive them out.

It ends on a no less dark note with the six-minute slow waltz of 'What You Can't Outrun' that look at the aftermath and the apathy, about the mess left to be cleared up and how, dazed by events, we're left "wondering what I could've done, if there was something I could've said" rather than simply being swallowed up in the tide, the point clearly being that now is the time to make our voices heard as it ends with an ambient swirl and backwards guitar solo.

Fitzgerald may have lit the spark but if you want to draw a comparison in the fears, anger, determination to overcome and call for a social and political awakening, then perhaps Springsteen is the touchstone. This is her Wrecking Ball.