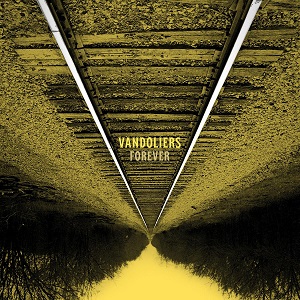 
A six piece from Texas comprising frontman Joshua Fleming, bassist Mark Moncrieff, drummer Guyton Sanders, fiddler Travis Curry, electric guitarist Dustin Fleming and multi-instrumentalist Cory Graves, they stir together cowpunk, Red Dirt country and Tejano music. This is their third album in as many years and the debut for their new label, bluegrass fiddle providing the launch pad on 'Miles and Miles', a rousing ode to life on the road ("My hometown's where the wind stops"), before Sanders' galloping drum beat carries along 'Troublemaker' a horns-lashed, raspingly sung number pretty much summed up by its title.

There's welcome musical variety to be found with the parameters in which they operate, 'All On Black' a mid-tempo punky, horns -embellished stomp about trying to win back a lost love, the drums rumbling, fuzzed guitars shantyish swayalong 'Fallen Again' an ode to screwing up and sinking into depression, 'Sixteen Years' a stomping account of trying to get back on the path righteousness that barrels along with the energy of Jason and the Scorchers, its roots trailing back to Buddy Holly, while 'Cigarettes In The Rain', shifting from acoustic strum to soaring electric, is a plaintive ballad about the futility of trying to hide a broken heart, vocally part Rod Stewart, part Steve Earle.

Bizarrely, in the wake of Emily Scott Robinson's new album, they too have a track titled 'Shoshone Rose', though this is a funky southern country blues strut about the Wyoming Casino and Hotel rather than a Native American female vigilante. Riding a Johnny Cash train rhythm chug, they' give full mariachi brass blasts in 'Bottom Dollar Boy' and 'Nowhere Fast', shutting up the cantina doors in fine Gaslight Anthem fettle with 'Tumbleweed', another song that balances the drifting urge with the eventuality of finally going home.

Following a trail marked by such outfits as True Believers, Social Distortion, Calexico and Turnpike Troubadours, they don't stray far from the familiar path, but they certainly leave a distinctive footprint.