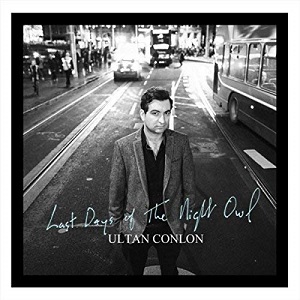 Ultan Conlon
Album: Last Day Of The Night Owl
Label: DarkSideOut
Tracks: 12
Website: http://www.ultanconlon.com
.Watching Ultan Conlon perform on stage with his wonderful band reminded me of an accountant jamming with the E Street band. To be fair to him he doesn't need the moves, he just smiles and weaves his magic songs through his audiences' attentive ears. That's what his songs do…they make you listen.

His latest album 'The Last Days of the Night Owl' has already reached classic status in the hearts and minds of the Moore household.

From the beatlesque section of the chorus of 'The Town Square' to the 1950's sounding 'Fond Memories', a song that Roy Orbison would certainly approve of, you feel that your are listening to something special.

The infectious repetitive guitar riffs and melodies sit alongside his Loughrea twang and combine with lyrics straight out of the Bacharach and David songbook. The song 'Hall of Mirrors' even touches the celtic soul of Van the Man with bouncing double bass and lightly touched piano, reminding you which part of the world Ultan truly hails from.

Already I've mentioned a few artists that Ultan has encapsulated in his sound, yet one legendary artist I feel Ultan is emulating most is the late Christie Hennessy. He is not just a pretender but we have found a new king to the Kerry songwriter's throne. Arise.

The wonderfully produced album touches heartstrings with 'Hurt Inside', 'A Weak Heart Like Mine' and 'The Fine Art of Happiness' and he also gets the feet tapping with 'Twice a Child', 'Sorrow Ease' and now an Irish national airwaves favourite 'The Measure'.

This is Ultan's third album plus a few EP's along the way including one he made with the late great John Martyn who obviously shared my optimism of his talent. This is the standard we will always expect from Ultan and an album that returns us to the glory years of Irish songwriters. From the aforementioned Christy to Jimmy McCarthy, Noel Brazil, Mick Hanly and Thom Moore, songwriting is in good hands here in Ireland.