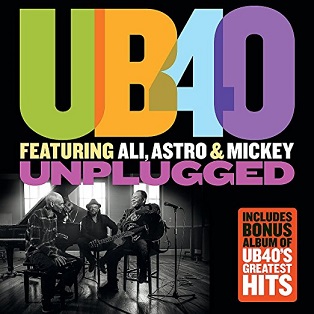 
Formed in 1978 UB40 are Britain's biggest-selling reggae band - in a long and illustrious career they have had more 50 singles in the UK charts.

It surprising then that it taken so long for them to take up the Unplugged route that was forged by Eric Clapton, REM, Neil Young and lots of others with lots of commercial success.

So here we have singer Ali Campbell, second vocalist Astro and keyboardist Mickey Virtue with sixteen tracks that bring together classic UB40 tracks and timeless covers.

The stripped back approach is at it its best on some of their earlier songs - the 1981 single One in Ten is vibrant, the vocals crystal clear, and the lyrics sadly still relevant today all those years later.

The reggae vibe is alive and well on tracks such as Kingston Town, the Chi-Lites Homely Girl, and Winston Groovy's Please Don't Make Me Cry.

UB40 always had that knack for taking popular songs and giving them the reggae treatment - so here you will find their no less than four number one singles - I Got You Babe, this time featuring Ali's 22-year-old daughter Kaya Campbell singing the lines originally performed by Chrissie Hynde, then there's Red Red Wine, with Astro's new voice over, Baby Come Back, featuring Birmingham reggae star Pato Banton, and (I Can't Help) Falling In Love With You.

The sound is rhythmic and melodic. Food For Thought, Rat in Mi Kitchen hark back to their early days and there's covers of Cherry Oh Baby which sounds as if it was just written for this band.

Some songs are less successful, Prince's Purple Rain being one that stands out but overall this is a satisfying collection of classic songs and UB40's back catalogue.

Added to this is another 20-track CD of UB40's greatest hits making this a fantastic package for anyone who wants to discover what UB40 are all about or anyone who followed their career down the years.