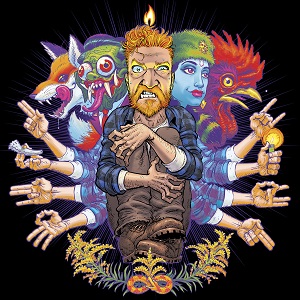 
Following on from the 'Purgatory' record that brought him to the attention of many, Tyler Childers has let loose 'Country Squire' on his increasingly eager public. With Sturgill Simpson and David Ferguson at the producers' controls again, the general musical approach to the record remains the same with Childers thumbing his nose at the glitter and glamour that pervades the Nashville country music scene. However, the central theme running through the songs revolves around the struggles demanded of any aspiring artist.

The title track starts the album with musical echoes of Waylon Jennings but lyrically reflects on whether he can ever make his 'Country Squire' campervan comfortable enough for the love of his life who sits at home, his wife, Senora May. Sometimes, Childers simply expresses the love that he's missing as on the slower paced love song and standout track, 'All Your'n'. Then, again, he can be thinking simply of missing the physical side of love as he does in 'Ever Lovin' Hand'.

The tracks blend into each other in a manner that gives the feel of a song cycle dedicated to the hardship of building your career. So, 'Bus Route' reflects on his youthful school ride before travel on the next track, 'Creeker', becomes more fractious when his writing recalls being on tour and passing many a lonesome hour in the bar. This all leads to the centrepiece of the record, 'House Fire', which captures the hard times when he and Senora May have been forced to live with others in cold and forbidding circumstances.

All this gets done in the context of lives that want a distraction from hardship whether that's achieved by drink, drugs or some other escape as we hear on 'Peace Of Mind'. This parallels the video for the aforementioned love song, 'All Your'n', which is something of a trippy, hallucinatory experience that links to the cartoon characters on the sleeve. So, all in all, the message is not one of self-pity but reflective of poorer communities just trying to make ends meet. On the other hand, the music is uplifting and suggests more plaudits to come for Tyler Childers.