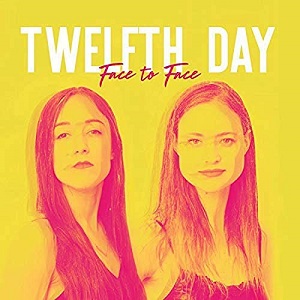 
I may have lost count, but I think this is now the fourth full-length album release by the established duo of Catriona Price (violin) and Esther Swift (pedal harp) (not counting one in tandem with Joy Dunlop - and there've been two EPs and a mini-album too). For almost a decade, these young Scottish ladies have been challenging listeners with their chameleon-like and constantly surprising take on contemporary folk. Surprising predominantly because what you hear on their albums almost completely belies the on-paper depiction of just two classically-trained females with high voices and two normally-traditional instruments. Their wake-up brand of folk embraces distinctive pop sensibilities by employing less expected (for folk) textures like percussive beats and layered acoustical treatments; here they're working with drummer John Lowrie and bassist Andrew Robb, who impart a more settled kind of radicality to the musical invention. As far as song lyrics are concerned, here Esther and Catriona are in effect picking up where their previous album Cracks In The Room left off, confronting social conventions by exploring uncomfortable subjects within current social issues, to often urgent, edgy - and yet exuberant - musical backdrops. In which regard, then, I'd have liked to have seen the lyrics reproduced in the package (or at least available on the girls' website).

The nervous energy of opening song Keep Me proves typical of the duo's slightly off-kilter yet logically strange approach - it has something of the air of "Kate Bush meets Roches' harmonies", scintillating and uplifting almost in spite of the introspective lyric. Later on the disc, Superwoman also evokes the spirited vocal gymnastics of Kate Bush and keeps up the excitement and momentum; the track feels inspired by the duo's experience of performing spicy covers of contemporary pop tracks (on the Speak From The Start EP). Album closer Reset Button has much of the quirky Roches spirit with its spiky harmonies and slightly ungainly circus-waltz gait. A gentler syncopation characterises the irregularly driven rhythmic pulse of What's Real and the languid, drifting beauty of Fact Of Life. The album's title track is an expansive, experimentally stretched instrumental (featuring some wordless vocalising in its closing stages) that develops what sound like traditional themes and patterns. The duo's ongoing world-travelling Routes To Roots project informs much of their music-making, here especially I thought the CD's other major instrumental track Oma's which balances African inflections and folk rhythms.

The album also contains four curiously gnomic interludes; some (like The Plough) may be little more than impressionistic sketches, but they all come to make a curious sense in context. Three of them (East, In The Bar and In The Filling Station) feature words, and the latter inhabits a weird landscape for sure, as does the ensuing itchily disturbing nightmare of Deep Dark Beast which matches a jazzy fiddle solo with electronic artifice.

As with previous Twelfth Day albums, the listener will marvel as much at the lasses' imaginative playing and intuitive interplay as at the often visionary and unusual nature of their musical gestures. After just a couple of playthroughs, the sheer boldness and inventive brio of this proudly self-produced album become both logical and irresistible.