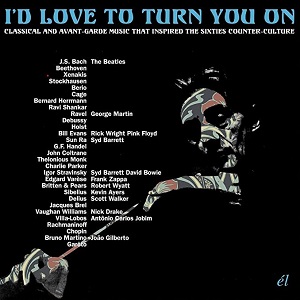 
The latest in the ongoing series of imaginatively assembled compilations from Él Records, the Cherry Red associate imprint that brought you box-sets of pioneering electronic music (Adventures In Sound), the iconoclastic music of Edgard Varèse, and music used in the films of Stanley Kubrick (all reviewed on this site). This latest foray into the less often charted sports a rather tantalising title whose true nature is explained more fully in its subtitle: Classical & Avant Garde Music That Inspired The Counter-Culture. A more mature, expanded awareness was spiked by the eternal curiosity of members of ’60s pop and rock acts, whose massive thirst for new musical experiences and a willingness to learn, soak up and then experiment within their own music, would bring new (to them) ideas and perspectives to their increasingly receptive audiences. In other words, it felt great to turn them on!

The all-embracing open-mindedness of outlook would manifest primarily in studio productions – i.e. records (discs) – since many bands were already forsaking the live-gigging environment and spending many hours in the recording studios instead. The Beatles, of course, were setting the trend when, having given up on live touring, they were turning Abbey Road Studios into a veritable playground of musical experimentation. Unorthodox sounds and techniques were unashamedly paraded – Tomorrow Never Knows is widely acknowledged as the first and most devastating of the group’s pioneering adventures, taking its cues from the avant-garde, notably the late-’50s electronic compositions of Karlheinz Stockhausen which manipulated sounds in ways hitherto undreamt-of.

The thesis of this new box-set is that everything was grist to the mill, and the “borrowings” (inspirations) in fact also extended temporally back into classical music as well as sideways from the avant-garde and jazz and what became known as world-music. The set presents over 50 consciously-identified examples of “influential borrowings”; some are abundantly obvious, some are bordering on pastiche; some can only be appreciated by direct reference to the original work/s; some prove a revelation, while there are also several whose stated connections or derivations may appear but fanciful, or highly tenuous to say the least. Some of the coincidences may be little more than instances of chord progressions in common, or sequences, rather than radical use of techniques, but no matter. And the compilers have missed a few of the more obvious correspondences and connections (which may be down to licensing considerations). But on the plus side, I might say where else can you find Bach, Handel, Ravel, Delius, Sun Ra, Berio, Coltrane, Villa-Lobos, Jacques Brel and Ravi Shankar side by side? I could also say I’d guarantee an educational experience for those listeners not versed in the wonderful and wildly varied world of what’s branded (for want of a better term) classical music.

Some of the pieces compiled here are nothing short of revelatory and radical even today – for instance, I’d defy anyone not to be moved and awed by the Neptune movement from Holst’s Planets suite, and in total contrast a great number of rock musicians have credited Stravinsky’s cataclysmic Rite Of Spring ballet score as one of the most brutally seminal in all western classical music – a must-hear for any innocent ear, and this set includes the first act of this ballet in its entirety (it lasts just 16 minutes, but what visceral impact!). Many of the actual recordings sourced for this set are staples of the gramophone, classic monaural performances of the post-war years which some of us (myself included) grew up with. So the examples gathered together on this set will doubtless prove both genuinely illuminating and mildly infuriating, depending on so very many variables and permutations in the experience (and musical tolerance) of each particular listener. Who must, like those back in the 1960s, keep an open mind to the possibilities. Like me, you’ll quite probably remain unconvinced by some of the stated connections and sources, but all the music proves worth investigating, whether with hindsight or afresh or a combination of both. And the accompanying booklet will provide much fascinating reading and plenty of food for thought. Recommended, and not just for the adventurous.