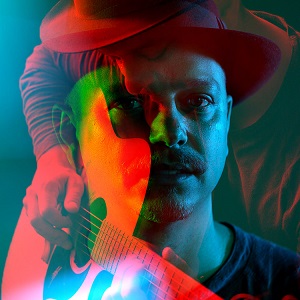 
Tristan Mackay clearly has a dedicated fanbase - his previous two albums both made it to number one in the iTunes blues charts, and he managed to raise over fifteen thousand pounds in a crowdfunding campaign to finance the recording and release of third album Invisible Light.

As his career has progressed from being discovered busking on the street to sharing stages with acts like Robben Ford, Eric Johnson and Billy Bragg, so has his music and though there were hints of modern pop in his previous two releases, the blues was always at the fore.

With this new release though it seems to be the modern singer-songwriter charts he is gunning for - there's definitely less Eric (Clapton) and a bit more Ed (Sheeran) in this collection of songs.

Opening track, aptly titled, Intro (We Found Love) features a Daniel Lanois-esque combination of synth, atmospheric piano and modulating reverb and is about as far removed from the delta as you can get - the catchy slide riffs on 'Dianne' should quell any doubts that Tristan's guitar skills won't be featured, but Robert Johnson this is not, and the blues takes a back seat during the first half of this album.

Mackay's drift towards a modern singer/songwriter palette and his desire to crack the BBC Radio 2 playlist makes its presence felt in several songs - he manages to tick the heartfelt-but-non-specific-lyrics box without falling into the cliche trap of some less distinguished writers, but there is a lingering feeling that he's not completely committed to these tunes, and they can feel formulaic in places.

But when the title track kicks in with a fat riff and a slapjack-treated vocal the lift in energy is palpable, and the song grabs your interest in a way that the previous tracks, as accomplished as they are, don't quite manage.

From this point onwards there are several tracks that have a weight and emotional punch that is lacking in the first half of the album. Only Human features impressive falsetto vocals and a fuzzed-out tremolo guitar that perfectly represents the theme of fragility of all humanity in the lyrics.

Highlight of the album though is the closing track Haunted, a tender reflection on mental health and those that support us through moments of doubt and trouble. It shows that Mackay has the chops to write a truly affecting song and as tough as these depths must sometimes be hard to plunder, the openness is a refreshing break from the crowd-pleasing generalities of the opening tracks.

Tempting as it may be to reach for the dizzy heights of playlist fame, it would be a shame if Tristan Mackay was to pursue those heights whilst neglecting songs of the caliber of Only Human and Haunted.

Sometimes the music that needs to be heard the most is that which reveals something of its author's true self, and when Mackay does just that, he's as good a songwriter as any. Clearly a talented writer, performer, singer and player, if he has more of these emotionally-revealing songs under that famous hat of his, then he should deservedly find the audience he is searching for.