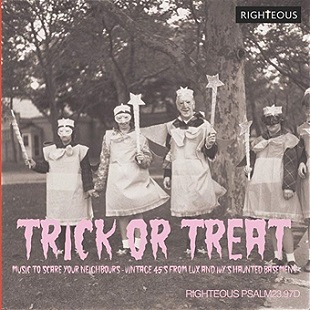 
The subtitle of this new two-disc compilation says it all: "Music To Scare Your Neighbours - Vintage 45s From Lux & Ivy's Haunted Basement". Yep, it's the latest in The Cramps' Lux & Ivy's continuing series of intrepid trawls through the dustiest and most dubious cobweb-bedecked corners of their nation's vinyl heritage, and yippee! For while this chapter is crammed with classic schlock in the best rock'n'roll fast-buck cash-in tradition, it also happens to embrace some pretty good music along its weird, wild and wacky way.

Almost all of the individual tracks herein will be unknown to anyone but the hardest-core connoisseurs (although some of them might just seem more familiar because they're straight R'n'R fodder given different scenarios or words that just happen to have a "ghoulish" connection). There's one well-known cut that just had to be included - Screamin' Jay Hawkins' manic I Put A Spell On You. Aside from which, there's only one other selection that I'd actually heard before - The Blob by The Five Blobs, which I recall as the theme song from the cult B-minus-movie The Blob (it also turns out to be a Bacharach-David composition!).

Hallowe'en is the perfect season for the novelty 45 - some acts made it a speciality, while others just dabbled for one ill-fated occasion. And with just two exceptions, everything you hear on this set is credited as being first released between 1956 and 1962. The set is a veritable feast of demented full-moon neighbour-scaring joviality. All human (and sub-human) life is here, from Mr. Were-Wolf (courtesy of Brooklyn doo-woppers The Kac-Ties) to The Mummy (Bob McFadden's "funny-exploitative" opus - pathetic in a Jerry Lewis kind of way - which was penned by Rod McKuen, of all people!), with appearances by Frankenstein (The Castle Kings, Carlos Casal Jr.) and his servant Igor (a manic portrayal by TV personality John Zacherle which even incorporates a couple of limericks into its lyric!). Ghosts and ghouls abound, often in delirious instrumentals like Ghost Train, Strollin' Spooks, Ghost Satellite and Night Fright, while vogueish voodoo is represented by exotic jungle and Latin rhythms on tracks by Don Sargent, The Interiors and Cyril Diaz, and the teen-friendly schlock of The Blob is joined by Fungus Among Us and The Cave Part 1 (I wonder what happened in Part 2?!). And there's some wonderfully ludicrous group names (Tony's Monstrosities and Tarantula Ghoul & Her Gravediggers - yes, really!).

As you'd expect with novelty records, some tracks are risible, others genuinely hilarious. There's some forgivable oddball over-the-top performances on Tomko's The Spook, Bobby Please's The Monster, and The Fang by Nervous Norvus (of Transfusion fame), while the overdose of horror effects on Don't Meet Mr. Frankenstein sounds more like the Texas Chainsaw Massacre (but then the mood's totally ruined by some chipmunk voices). At the same time, it's good to hear roster artists like The Coasters and Kay Martin venturing outside their regular ambit into the twilight zone, and Bo Diddley even gets in on the act with Bo Meets The Monster. The authentic barrelhouse-hillbilly-swing of Graveyard Boogie by Buster Doss & His Arkansas Playboys is great fun, as is the delicious glee-club vibe of Mr. Ghost Goes To Town from The Five Jones Boys; from roughly the same vintage (the '30s) comes Swingin' At The Séance, an early side by long-lasting gospel group The Deep River Boys.

All that's missing is the Monster Mash I guess, but you'll still be able to have monster fun for a couple of hours with this highly exhumable collection of slightly tacky "guilty pleasures". Vintage screams assured (proving that fangs ain't wot they used t' be!), so there's everything you need for a quiet night in! Great liner notes too - just the right amount of enticing detail and juicy trivia.