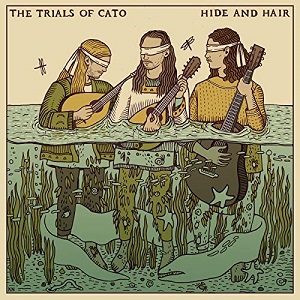 
Going by some of the reactions to this debut album, you might think the trio had descended from Elysium as the saviours of the UK folk scene. In fact, comprising William Addison on Irish bouzouki and accordion, Robin Jones on mandolin and tenor banjo and Tomos Williams on guitars and bass, they stem from North Wales and Yorkshire, by way of Lebanon. Drawing on the folk revivals of the 60s and 70s and rooted in Irish and British traditions, it is indeed, pretty good, but a little perspective might be needed here.

The material, both songs and instrumentals, comprises a mix of self-penned, traditional and one cover, opening with 'Difyrrwch', an instrumental featuring their arrangements of two Welsh tunes ('Hen Ferchetan', 'Dyfyrrwch Gwyr y Gogleff') and one English ('The Parson's Farewell') which is well-played, but doesn't really offer anything out of the ordinary. The other two instrumentals, the banjo-dominated traditional 'Kadisha' (named for an area of Lebanon) paired with Brian Finnegan's stompier 'Nightride To Armagh' and the skittering circling patterns of 'Libanus' are more complex and impressive, but even so they're a tad polite and never really catch fire.

The first of the songs, Addison on lead with the others providing harmony, 'Gloria', about self-discovery and being true to who you are, lifts proceedings, the narrative taking its protagonist from working at the coal face to discovering love, cross-dressing and 'a woman's ways' in Soho's bars on the wings of a catchy melody and a lyric that has as much to do with 'Lola' as 'She Moved Through The Fair'.

Given it's sung in Welsh by banjoist Jones, other than the title's a girl's name meaning Summer, I have no idea what 'Haf' is about, but it chugs along nicely on the way to 'Gawain', Addison back on lead for an atmospheric five and a half minute number with medieval troubadour flavours, the vocals initially muted in the mix that draws on the legend of Gawain and the Green Knight, gathering into a more prog-folk, psychedelia and Eastern shades for a song about dealing with extraordinary circumstances.

The cover comes with their take on Graham Moore's folk circle favourite 'Tom Paine's Bones', a song also recently recorded by Grace Petrie on her new album. Her's is a rumbustious Poguesy-stomp while, singing in harmony, the trio's leans more toward the Roy Bailey version, but with added mandolin. Both are well worth seeking out.

Jones back on lead, set to a shanty-esque melody, 'These Are The Things' continues to spin the political thread with a lyric about social injustice as he sings "when you're kicking a man for being down on the floor/These are the things that I cannot ignore" and how "profit and property's the law of the land."

Addison upfront and with a minimal arrangement and all three harmonising on the chorus, 'My Love's In Germany' is, of course, a much sung traditional number about the Thirty Years War, here with Stefan Hegerat guesting on martial snare drum, And finally, the closing track fuses band original 'The Drinkers', a song about knocking back a few that opens near unaccompanied before launching into a lively shanty, with the traditional self-descriptively titled 'Reels'. The lyric also offers a succinct encapsulation of how legendary French poet Paul Verlaine wound up broke, alone and an alcoholic on account of his fondness for absinthe.

A little less restraint might not go amiss next time round, but this assuredly indicate they have the promise to live up to the somewhat premature expectations with which their arrival on the UK circuit has been greeted.