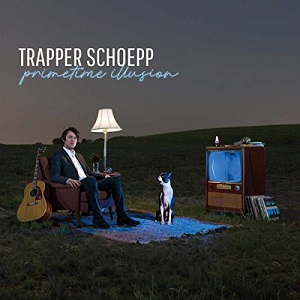 
Bagging yourself a co-write with Bob Dylan must be on every singer/songwriter's bucket list, but Milwaukee-based tunesmith Trapper Schoepp is one of a select few who can tick that dream off - 'On, Wisconsin', the closing track on new album 'Primetime Illusion', features a set of lost lyrics written by Dylan in 1961. When they resurfaced after being offered for auction in 2017, Schoepp, upon seeing a photograph of the handwritten song in Rolling Stone magazine, 'connected with it immediately' and set them to his own tune.

The song itself, which features heavily in press for the new album, is a jaunty one, with a simple lyric about homesickness - 'Visions of Johanna' it is not and, if you skip to the last track hoping to hear a great lost Dylan song than you may find yourself disappointed, but, taken on it's own merit it's a fine little tune. Those that do skip straight to the closing track should immediately head back to the beginning though as otherwise they'll be missing out on ten tracks of well crafted classic American folk-rock.

Despite the Dylan co-write the overriding influence seems to be another great American songwriter - Tom Petty. The albums eleven tracks are littered with moments that could have sneaked their way on to any number of Petty songs - the ringing twelve string guitar on opening track 'Shakedown' wouldn't be out of place on 'Damn The Torpedos', and the general clean, punchy production across all tracks reminds this writer of Petty's Jeff Lynne-produced 'Full Moon Fever'.

Not that the album is by any means a tribute act, but it's obvious that Schoepp (and his producer, Wilco multi-instrumentalist Pat Sansone) are familiar with most of the great rock n roll that America has produced since the mid 60s, and he's not afraid to use that knowledge to craft a sound that's instantly recognisable without being derivative - fans of heart on sleeve, unashamed anthemic rock will find lots to enjoy here, even tracks with titles such as 'Drive Thru Divorce' and 'It's Over' pack a fist-pumping punch.

There's plenty of hooks, whether they be the Free-aping opening chords of 'If All My Nines Were X's' or the spaghetti-western riffs and rhythm of 'TV Shows'. All in all it's a solid album and one that would no doubt translate well to a live setting, but I can't help feeling that the shadow of expectation that a Dylan co-write generates hangs a little too strongly over the rest of the tracks, which may not get the attention they deserve.

Which is a shame as, once you get past the long shadow that Dylan's name obviously casts, Trapper Schoepp has produced an album of breezy, catchy tunes that, on further listen, reveal some unexpected depth and reflection in the lyrics - with material such as this Trapper hardly needs the headline grabbing co-write credit to garner attention as his music deserves to stand on it's own two feet and under his own name.