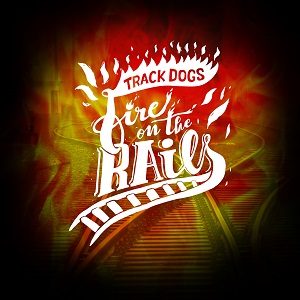 
An Anglo-Irish-American acoustic quartet based in Madrid lining up as Howard Brown, Robbie K Jones,Dave Mooney and lead vocalist Garrett Wall, named for the workers on the New York subway, between them they play cajon, banjo, ukulele, mandolin, trumpet, guitar and piano. This is their sixth album and continues their inventive cocktail of folk, jazz and Americana, kicking off with a guest appearance by Phil Beer on 'Love & War', a reminder that "we're all refugees from love and war" and not to turn our eyes away when we see evil, opening in moody piano, strings and plucked fiddle eastern European shape before bursting into a lively hand percussion and brass accompanied exuberance.

Following a similar structure and Brown's trumpet, the mood's sustained over the next few tracks, the Latin sway of 'I've Needed You', cautionary advice 'Better Off On Your Own' with its rhumba percussion rhythm, 'Dragonfly's Castle' featuring Danny Erker on mandolin and the end of the world partying of 'On The Last Night'.

Things shift for 'Don't Delay' which, led by Ashley Campbell's banjo, shines the Americana light on its dappled, easy going rhythms as they sing about cutting the ties that stop us from moving on when there's no longer any point remaining. Then the brass returns in funky 80s soul mode with 'And The Piano Sings', a Brown-sung tribute to Freddie Mercury and about living life to the full in the time you have before things get all folksy and fingerpicked acoustic with the tranquil 'Abi's Lullaby'.

Acoustic guitar also dominates that choppy rhythms of 'When It Comes', a let's see what happens with the relationship ("spend the night and see what morning brings") rather than making promises you can't keep before throwing curveball for the final gospel-infused down on my luck number, 'All Clapped Out', sung a capella with, yes, handclap and stomp percussion. Heavily weighted to brass-driven tracks until midway, I'm not persuaded it's quite as musically and stylistically diverse as their last outing, but there's no denying the infectious ebullience they create.