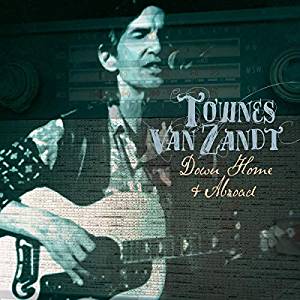 
In many ways Townes Van Zandt was an enigma. Born into a wealthy family, in possession of an IQ high enough to warrant studies as a law student, (he quit), this Texan-born man of privilege nevertheless suffered personal demons which plagued his all too short life. Thus his obvious great talent as a songwriter has to be viewed alongside his addictive personality, with the prediliction for alcohol and drug abuse ultimately triumphing over the said talent, his life ending on New Year's Day 1997 from a heart attack.

The mid 1960s saw him playing, mostly covers, in Houston bars and clubs, before a move to Nashville. With Townes spending most of the 1970s moving between Austin, Houston, Nashville, New York and the Colorado mountains, the period between 1968 and 1973 was prolific for him and saw the release, over five years, of half a dozen albums.

Despite the fact that he was never to have a release on a major label and he remained very much a cult-figure out of the mainstream gaze, the release of songs such as Pancho & Lefty, To Live is To Fly and If I Needed You nevertheless raised him to near-legend status amongst the songwriter circles of both the US and Europe. Many artists, including Cowboy Junkies, Nanci Griffith, The Be Good Tanyas, Neil Young and Gillian Welch have cited Van Zandt as a source of inspiration, and several of his songs have been recorded by other artists. Indeed, Emmylou Harris & Don Williams had a No. 3 country hit in 1981 with If I Needed You whilst Willie Nelson & Merle Haggard took Pancho & Lefty to number one on the same charts in 1983.

The well-documented personal issues inevitably meant that his performances oscillated between the lucidly brilliant, when disciplined, and the shambolic, when under the influence. This is evident if one takes the time to listen to the variance in the quality of the nigh-on twenty extant official live releases. so what then of what is presented on this release?

Well the good news is that both shows presented here see TVZ , generally, 'together' and in great form, playing many of his classics including Pancho and Lefty, If I Needed You, To Live Is To Fly and Tecumseh Valley amongst others.

The first disc features a live show from The Down Home in Johnson City, Tennessee, on April 18th, 1985. Here, the PR release suggests he is accompanied by Mickey White on guitar, and Donny Silverman on flute, although there is surely some sax and cello/double bass here too in places? (Unfortunately, neither the sleeve notes nor the incoherent introduction at the end of track 1 on the CD provide clues). Nevertheless, the aforementioned duo provide highly accomplished accompaniments that are both sympathetic and well-judged.

Throughout this first CD, the power of the lyrics shine through, lyrics that never appear far-removed from a sense of struggle, be it personal or more universal. The rendition of the melancholic Rake given here is particularly moving, and the rapport with the audience at times humorous.

Disc two is a show from The Tavastia, in Helsinki, Finland, recorded on June 18th 1993, his first visit to the country. Stripped back, it features just the voice and guitar of TVZ, a voice that whilst still full of conviction, appears somewhat more fragile than on the previous disc. Conversely, the sonorous tones from his Gibson guitar are much more pronounced here.

withstanding a few hums and buzzes in the recording and some crude editing between tracks, what is presented here evidences Townes as a classic guitar-playing poet and storyteller, whether in more blues based efforts such as Brand New Companion, the weighty Tecumseh Valley or the more country-flavoured Don't You Take It Too Bad, and the listener will be rewarded by drawing comparisons between the two recordings, especially if cognisant of Van Zandt's personal history.

Described by Billboard magazine as "largely-obscure-if-legendary," Townes Van Zandt was a remarkable singer/songwriter, and this release is worthy of consideration, shining, as it does, more bright rays of light on a much-missed songsmith.