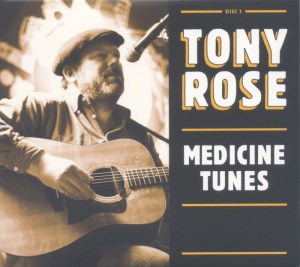 Tony Rose
Album: Medicine Tunes/Roll High and Roll Good
Label: Canary Row
Tracks: 24
Website: http://www.tonyrosemusic.com
.Not the late English folk singer, but a Prague-based Glasgow-born singer-songwriter and sometime member of folk-rock outfit Two Dollar Bash, this marks Rose's solo debut and comes as a two disc package, one featuring himself and his longtime band alongside producer Mark Mullholland on songs born out of a collapsing marriage, separation from his children, the death of his parents and the healing power of music and friendship, and the other a compilation of covers by other artists, pretty much none of whom you're likely to have heard of.

Starting with Rose's own music, 'When I Walk Will You Follow?' is a folksy banjo led number that harks to Guthrie influences, while Broken Heart and Sad, Sad Memories pulls up a stool in the sort of old school honky tonk frequented by Hank Williams. The latter pretty much sets the template for what follows, a generally mid-tempo, frequently waltz time collection of acoustic rootsy country numbers, most hovering round the five-minute mark, etched out with banjo, mandolin, dobro, slide and the occasional bouzouki. There's no life-changers, but things like the sparse slow sway banjo bluegrass What Do I Ask The Moon?, the liltingly lovely Lost In The Valley and the handclaps backed Texicali-coloured South of the Border are particular highlights while the melancholic By The Silver River adds a further folk flavour to proceedings.

The tracks on Disc 2 are variously assembled from existing albums and material recorded for the project, the musicians involved spanning four continents and the songs ranging across his career from his early 80s bands to his Berlin projects in the 2000s. It opens with a new recording from Berlin, Joe Armstrong giving as Neil Young rock touch to 'You Don't Do Nothing Wrong', the same musicians and approach taken for 'Roll On', sung by Claude Cahn. Other project-specific tracks include a couple by Mulholland, the Dylanish country colours of 'Everything is Changing' and the gentle Cahn duet 'Hey You In The Darkness', the harp blowing French sung Cajun chugger 'Tuez SVP' by Matt DeHarp and Ollie Beuth's mournful stark piano ballad Waitsian take on '100 Miles Behind'. Of the previously existing numbers, particuar stand outs would have to include the lazy, fiddle-led 'One Day I'll Be Gone' from The Lazy Pigs, George Stott's countrified jogger 'Lostville' and, in a gender retitling of the Two Dollar Bash 'Old Man Song', a frisky bluesgrass thigh slapper 'Old Woman' courtesy of Tallahassee outfit The Mayhaws fronted by Sharla June.

Probably one more for his existing European fan base, but if you've not encountered him before there's certainly sufficient incentive to check it out.

Song Of The Angels