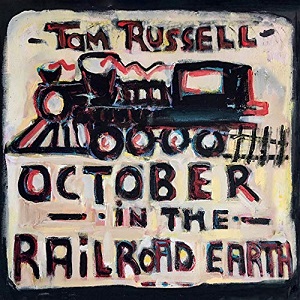 
Rolling Stone has called Tom Russell "the greatest living folk-country songwriter" and who am I to disagree ?

In fact , for me, Tom Russell can do no wrong , having released a succession of brilliant albums , including "Hotwalker", "The Rose of Roscrae", "Mesabi" and 2017's superb "Folk Hotel".

Now, the good news is that Tom is back with a new album "October in the Railroad Earth" ,which takes its title from a poem by Jack Kerouac. The even better news is that it is another cracking album from Tom.

Tom's albums are like a collection of short stories and his songs fall , roughly, into two categories , namely songs based on real-life characters and places and songs about his own experiences.

The opening title track falls into the first category as it recounts Jack Kerouac's time working as a railroad brakeman in San Francisco. A brisk country shuffle with a clear nod to Johnny Cash , this terrific song features a superb honky tonk guitar solo from "Titan of the Telecaster" Bill Kirchen who is perhaps best known as one of Commander Cody's Lost Planet Airmen.

Tom wrote "Small Engine Repair" about a man who fixed his lawn mower , never thinking that it would form the basis of an Irish film of the same title , which features actor Iain Glen singing the song.

One my favourite songs on the album is the delightful Tex-Mex-flavoured "Isadore Gonzalez" which tells the sad tale of a Mexican vaquero [ cowboy] who toured with Buffalo Bill's Wild West Show in the 1880's and who was unfortunately killed in a riding accident during a show in England and who is buried in an unmarked grave in Bristol. The authentic Tex-Mex sound is supplied by Max and Josh Baca of the Tex Maniacs.

Speaking of Texas , the following "Red Oak, Texas" is the mournful , true story of a pair of twins who were war heroes but who never got over the trauma of the fighting in the Middle East - "They learned how to fight but not to heal".

Another cracking track is the evocative "Highway 46" where Tom encounters the spirits of the pioneers of the Bakersfield Sound , including Wynn Stewart, Buck Owens and Merle Haggard. Tom skilfully recreates the Bakersfield Sound ,with its "Telecaster guitars, pedal steels and treble turned up so bright" , to which Eliza Gilkyson adds lovely harmony vocals.

Tom's storytelling skills are much in evidence in the talking blues of "Pass Me the Gun Billy" in which Tom recounts a scary but true Wild West Adventure he had with his cowboy brother Pat , "when it all went to hell and gone".

In total contrast is the country-rock of "When the Road Gets Rough" which relates the hazards of touring [ in England] with "eight hour drives, bad hotels and dodgy food" but also recognises the good times "when the magic outweighs the difficult days".

The album closes , appropriately enough, with the first song Tom " learned as a kid from Johnny Cash's first Sun Records release" namely "Wreck of the Old '97" about a train crash. Tom and band faithfully recreate the sound of "The Hot and Blue Guitars of Johnny Cash" on this affectionate tribute to The Man In Black.

Tom himself describes this album as "Jack Kerouac meets Johnny Cash ....in Bakersfield" which is entirely accurate, of course . I would also describe it as yet another superb album by a master storyteller and would highly recommend it to anyone who admires great songwriters.

When The Road Gets Rough