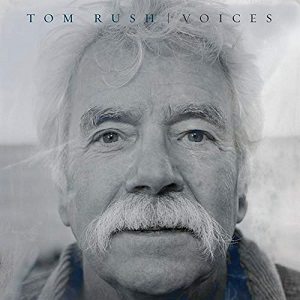 
This album came out last April, but has only recently found its way into my mailbox. Better late than never, though!

The big conundrum about Tom, however, is that although he's released eleven studio albums, none of these has featured his own original compositions to any significant extent. Only around 20 of these have ever made it onto record in total in fact, even though he's had a healthy reputation as a songwriter ever since the classics No Regrets and Rockport Sunday appeared on his 1968 LP The Circle Game (a record which also contained Tom's prescient covers of a clutch of Joni Mitchell songs including Urge For Going, at that time unrecorded by Joni herself). So Voices will have been welcomed by Tom's fans purely on the basis that all but two of its dozen tracks are originals (the remaining pair being better-than-respectable trad covers of Corina Corina and Elder Green, which have been included, says Tom, because he "didn't want to compromise his folksinger credentials"!).

Tom's own songs are the result of something of a creative outpouring in recent years. They inhabit a timeless, confident, settled, easygoing folk-Americana s/s groove that's hard to dislike; they have no truck with elaborate or obscure metaphor, instead projecting straightforward and genially evocative emotional settings. Their style is defined by Tom's warm, mellifluous baritone voicing his experiences and sometimes melancholy thoughts laced with gentle, often wry good-humour. You might describe it as old-school songwriting perhaps, and yes, old-fashioned in the sense that it's unlikely to ever go out of fashion. Listener-friendly almost to a fault too; and thus, perhaps inevitably, there's also a slight feeling of déjà-entendu that's hard to shake off.

Tom's vocal and guitar are accompanied, in a suitably relaxed feelgood mode, by a small, tight band of Nashville studio musicians (coordinated by producer Jim Rooney and including Al Perkins, Sam Bush, Richard Bennett and other luminaries, with some harmony vocals courtesy of, among others, Kathy Mattea and Suzi Ragsdale). There's a couple of songs where the backdrop's closer to rock'n'roll than Ameriana, which lends the material an air of comparative anonymity, but otherwise Voices is a perfectly amenable affair, and a refreshingly undemanding listen.