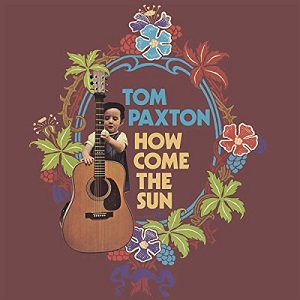 
This reissue usefully collects together a couple of obscure releases that at first sight may not appear to belong together. Even so, they nevertheless both contain much that is quintessential Paxton - albeit none of the songs for which he's best known or most fondly regarded; for those, of course, you've plenty of choice on the anthologies.

To put these releases into some kind of context, the 1967 EP, recorded between albums 3 and 4 (Outward Bound and Morning Again), straddles two of the polarities of his output up to that point, being something of a game of two halves, with a pair of unashamed children's songs (The Marvelous Toy and My Dog's Better Than Your Dog) bookending two compositions with more of a traditional American folk feel (the Negro ballad of Beau John and the boyhood reminiscence Deep Fork River Blues). All except Beau John are revisits of songs that had appeared on Tom's 1962 (pre-Elektra) privately-produced live LP I'm The Man That Built The Bridges, and naturally these will be considered definitive renditions. On this EP, an all-acoustic set, Paxton's supported by Barry Kornfeld and Felix Pappalardi. The performances are predictedly timeless, so it's good to have them available again and in remastered form on this CD (while noting that the four tracks have also previously been available as bonus tracks scattered away on the Rhino twofer of the 3rd and 4th Paxton albums mentioned above).

The LP How Come The Sun dates from 1971, and was the first fruit of Paxton's three-album deal with Reprise that came straight between the "glory years" of his long stint with Elektra and a curious interlude with Gordon Mills' MAM label (which in turn preceded his signing with Vanguard in the late '70s). How Come The Sun is probably regarded as a minor entry in the Paxton canon, and it's true that its nine tracks are a bit of a mixed bag, both in tone and subject matter as well as stylistically, but they still audibly inhabit the multi-faceted world of Paxton that anyone familiar with his earlier work will recognise, and I rather warmed to the LP now (indeed, hearing it over 40 years on I was actually taken with how good it is). The title song's philosophical conundrum complements the archetypal wistful chamber-folk-melancholy of She's Far Away and the wry, bluesy Prayin' For Snow, while the keening A Sailor's Life draws on a kind of traditional Celtic folk mode, and the political content is comparatively subdued, this ranging from the psych-tinged anti-war commentary I Had To Shoot That Rabbit to the hammier General Custer. The musical settings are nicely restrained albeit with soft-rock and electric touches, and featuring guitars and keyboards from Marc and David Horovitz (the latter getting a co-writing credit on three of the nine tracks).

The accompanying booklet essay gives a good biographical and discographical overview, although not a lot of commentary on the specific releases collected on the disc. Finally, given Paxton's household-name status, it's something of a surprise to discover that this BGO release marks How Come The Sun's first appearance on CD - and it's a welcome one, not least since some of its best songs are unavailable anywhere else (not even on the numerous Paxton compilations) but principally in that it's an album of quality that doesn't deserve to languish in the vaults.

The Last Thing On My Mind