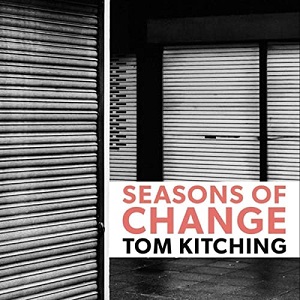 
The latest album from Tom Kitching, described by Mike Harding as "one of the best English fiddlers ever", is the first in five years and comes following his 18 month busking tour of England detailed in a companion book of the same name, Seasons Of Change.

This 'tour' took place in 2018 and 2019, and thus the album is contextually the soundtrack to a post-Brexit referendum journey, and is an attempt, in his words, "to get under the skin of a country I thought I knew and really explore an instrument I also thought I knew - a year and a half of the most intense practise I'd ever done", and was supported by Arts Council England via a National Lottery grant and a bursary from the EFDSS.

Recorded 'live', with the exception of a few overdubs of extra instruments, high in the Staffordshire peaks in Danebridge Methodist Church, by Jon Loomes, who also mastered and co-produced the release with Tom, the high quality of the playing and interpretation of the 11 tunes on the disc certainly succeed in reflecting the 'continuous living tone' to which he aspires, and are a testament to the undoubted love he has for his instrument.

The album clearly demonstrates his sparkling fiddle dexterity and comprises a mixture of both traditional and self-composed tunes, together with interpretations of the work of others. Whilst at times it fairly fizzes along, representing not only a snapshot of the material played on his busking trip but also the odd tune spawned as a result of the adventure, the release also has moments of great grace and delicacy.

Whilst listening, it often seems as if there is a full, multi-instrumental band playing, such is the depth of sound produced. In reality Tom, who also plays mandolin, is joined only by the wonderfully talented Marit Fält on Nordic mandola and cittern and Pilgrim's Way bandmate Jude Rees on English Border bagpipes. Whilst in no way wishing to diminish Tom's own virtuosity, the value that these musicians add through their accompaniments is immense.

The eclectic mix of tunes on offer here in many ways belie Tom's 'traditional musician' label. Never one afraid to push the musical envelope, the tunes, jigs, polkas, hornpipes presented may, at any time, take a sudden diversion into the, welcome, unexpected. Thus opener, the traditional reel 'Old Molly Oxford' twists and turns before leading into Tom's own 'Belt Driven'. Inspired by the abandoned old industrial buildings he encountered all over the North of England, this percussive, rhythmic fiddle tune replicates the repetitive sounds of the machines and engines that once echoed throughout the region, with the additional contributions from Jude and Marit creating a glorious soundscape.

As mentioned above, variations of tempo ensure interest is maintained, thus whilst the first of a pair of jigs, 'Grimstock', temporarily slows things down, 'Greensleeves Morris' straightway picks up the pace, almost defying anyone not to tap their feet. 'Miss Firth's', a Gavin Davenport tune inspired by the British occultist, is paired with 'Eglantine' a waltz which was one of Tom's favourite busking tunes. Two relatively modern pieces follow, the reel 'Hellebore', partnered with Nigel Eaton's' Ice House Schottische' before Tom's own, upbeat 'In Store Bakery' is a reflection on one of his busking eating habits.

The lilting 'Lamaload' precedes the classic Morris tune 'Bean Setting', mischievously rearranged here 'to irritate anyone trying to dance to it' before a change of tone with the stately 'Staines Morris', which featured in Playford's dancing Master of 1651, and certainly here has an air of Hampton Court finery about it. Matching this with a 17th Century dance tune, 'Trip to Paris', seems an inspired pairing, as does the next track, in which 'Tom Trolley's Hornpipe and the jig 'Pidge' provide uplifting, jaunty offerings.

The penultimate track, 'Women and Wine/Old Age and Young' once more displays Tom's expertise, and the album closer is a very strong piece that leaves the listener breathless and lingers long in the memory. 'La Fanatique' an energetic French piece dating back to 1709 is matched with Tom's own, equally frenetic, 'Infinite Expresso', named after an incident in a dockers' cafe in Harwich.

Tom Kitching is a prodigious talent, and this most enjoyable and accomplished album cements his place at the forefront of English fiddle players.

The premise was, ostensibly, straightforward. To spend time travelling the length and breadth of the country, busking, in order to find 'a place called England'. Thus, despite the book's sub-title 'Busking England', and the fact that reference is made to aspects of busking such as etiquette and prime locations for acoustics, shelter and footfall for example, in his own words, "This isn't really a book about busking. It's about people, place and that elusive beast - Englishness...."

Setting off one day in April from his Manchester home, and writing what became a popular 'Busk England' blog, the source of the book's content, the 'journey' took some 18 months, although this was not continual travelling. Whilst there were breaks to return home, appear at gigs and festivals, and the locations in the book are not necessarily presented in the chronological order visited, neither of these factors impede the narrative in this, his first, book.

His clear, straightforward writing style, often showing self-deprecating humour, and always humility, makes for easy reading. Thus there are many occasions when face-to-face encounters, or deliberate avoidance of the same, bring a smile. In Cromer, the lady who stopped him from playing an Irish jig to ask him if could play an Irish jig, the stand-off with the agitated employees of the trainer shop in Norwich, the heckling parrot in Deal, the antique shop proprietor in Hastings and the homeless man in Penzance who gave a flower in lieu of money.

In themselves, such anecdotes not only entertain the reader but also shine a light upon aspects of the character of the diverse individuals making up our society. Within Seasons Of Change, however, we are presented with a much more illuminating view of concepts which unite and divide us. Busking served as a very convenient foil for exploring these discrepancies and at times the writing is thought-provoking and can make for uncomfortable reading. Whilst there appear from his experience to be similarities between affluent and more deprived areas, generosity is present in both, albeit small change versus pound coins, it becomes clear that we are also a country divided.

Reference to homelessness occurs on several occasions, with the author's view that errors may have been made, resulting in having to live on the streets, but that this is not a deliberate lifestyle choice and that compassion and support are needed, rather than approbation and the perceptions held by some passing comments to him whilst busking such as "they'd only spend it on drugs"

In addition to these individual examples, Kitching also broaches the subject of deprivation at the whole community level. The visits to Smethwick, Dudley and Bradford are in sharp contrast to those of Aylesbury and Welwyn Garden City, but it is possibly the writing related to Durham ex-mining communities, with references to their 'Category D' ratings which hits home the hardest. Poignant in the extreme, his fly-on-the-wall observations may not have gone down too well after his first visit to Easington Colliery, but obviously it proved to be an education, "It opened my eyes to a strength of connection between people and place that I hadn't really understood before" In many ways this is the strength of the book as a whole, it may just do the same for the reader.

The CD and the book are both worthy of merit and investigation in their own right, and can be highly recommended; however enjoying them in tandem is also firmly endorsed.